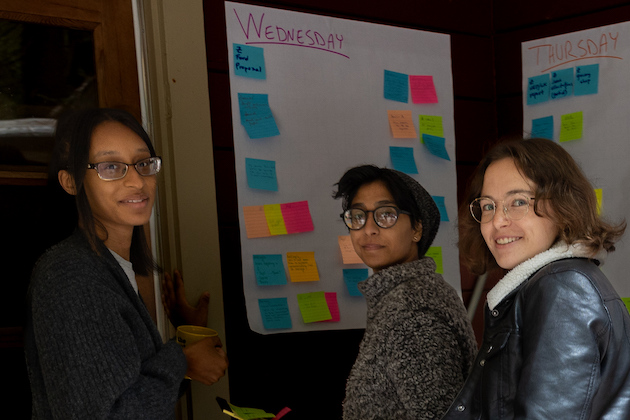 This post is co-authored by MiKayla Green, Sajel Galhotra, and Sierra Wells.

Gathered around a table under the canopy of the redwood forest, the three of us had more or less the same response when HRDAG executive director, Megan Price, kicked off the 2022 retreat. She asked our group of 14 to share our feelings toward the week that lay ahead of us, and seasoned retreat-goers like Patrick Ball and Rafe Kaplan shared their anticipation of fruitful collaborations with colleagues and nostalgia for past retreats (like those in 2014, 2015, 2016, and 2018). We, on the other hand, were HRDAG newbies, and our collective response to Megan’s prompt could more or less be summed up as: “kinda nervous, don’t really know what to expect”. After all, it’s not often that a summer internship includes a week-long retreat with your coworkers, mentors, and their colleagues. The following is an account of this week in the California redwoods amongst a hodgepodge of people united by their passion for using quantitative analysis to combat injustice, told from the perspective of the newest people on the HRDAG block: the 2022 summer interns.

Imagine eating oysters, taking walks on the beach, watching seals, playing Liar’s Poker (without money involved) and sleeping in the redwoods all while gaining valuable skills as a data scientist. It sounds unrealistic, right? It’s not what I expected at all coming into this retreat. I thought we’d all come together so that it would be easier to have meetings and write code together. Instead, we were also able to build connections. On Tuesday we arrived. Some reconnected with old friends, while others met with members of HRDAG in person for the first time. During the first morning of the retreat, we set our goals by placing sticky notes on pads that corresponded to each day of the retreat. My main goal was to complete a complex canonicalizing task for some variables from police data. And although I was not able to complete this during the retreat, I learned something new every day that pushed me to complete this goal and more.

During the retreat, I improved on a number of technical skills. On my first night of the retreat, I met Jeff, a former HRDAG computer scientist and current consultant. During Jeff’s short stay, he helped me and the other interns with applying refactoring more successfully. Specifically, he mentored us in reorganizing a specific task in a way that separates the logic of the code from the actual execution of the code. This experience has pushed me to incorporate more functions into my code, so that it is easier to read. Patrick taught us how to improve our ergonomics so that we can continue to do this work for a long time without injury. One of my biggest accomplishments on this retreat was when Tarak taught me how to extract data tables from pdfs into a form that can be used for data processing. This was especially memorable for me because it was a completely new skill that I did not even know existed before coming into the retreat.

Along with being around so much technical knowledge, the retreat offered space to reflect on why we, as a group and individually, are committed to advancing human rights. Sierra, Jeff, and I ended up having a late night conversation about how data science can advance different theories of change. We discussed how change does not always occur by providing an estimate of killings in a conflict that we can bring to a court of law, but that movements for human rights can also progress by using data science to simply change one person’s mind about misconceptions around human rights violations.

Along with the seriousness of the retreat, we also had great moments of fun. On Thursday, we ate oysters by Tomales Bay. This was my first time having raw oysters, and it was a delicious experience that I won’t forget. On Friday we took a walk on the beach. While more experienced hikers continued the walk up some rocky hills, Sierra, Bailey and I sat on some large rocks at the shore and discussed the differences between the programming languages, Python and R, and how computer science and data science programs could be improved for students. Later, while Tarak, Bailey, and Suzanne were cooking, I sat outside the kitchen working before dinner, listening to Tarak’s amazing playlist. Later that night, I listened to Beyonce in the living room with Sierra and Robin. On Saturday, our last night of the retreat, Sajel taught us how to play Liar’s Poker and subsequently beat us. These experiences were some of the best parts of the retreat, getting to relax and learn about each other’s interests. Although I did not know what to expect walking into this home in the redwoods, I don’t think I could have ever predicted what took place during the retreat. It is rare that you can spend a week in the woods with your coworkers in a safe space while getting work done, learning new things, and building meaningful relationships. And although we worked a bit more than a usual workweek, I left the retreat feeling renewed as a data scientist. 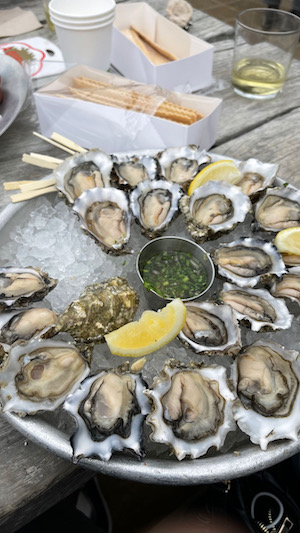 For me, the retreat represents a turning point in my programming skills. The difference between how I was programming in R at the beginning of the retreat and how I am programming in R now following the retreat is like night and day. Maria and Tarak showed me how useful dplyr and purrr are and how to execute split-apply-combine logic. This made my code easier for me to write, easier for others to read, and quicker to run. Jeff taught me when and how to encapsulate into functions so that the rest of my code works like a table of contents that calls each function in turn. Then Patrick showed me how to create a test suite for the functions (“How do you know when it worked? Remember that!”). In addition to many people taking the time to share their wisdom with me, I learned a lot from sitting behind people while they coded, watching closely, and taking note of their choices. This helped not only with writing code but also developing workflow and ergonomics that work best for me; I hope to be doing this work for a long time, which means I need to establish habits that make my work as comfortable and painless as possible! Thanks to Suzanne, we all worked in complete comfort during the retreat as she ensured that everyone slept exactly where they wanted and ate exactly what they wanted! Overall, due to the growth in my programming skills, I was able to contribute significantly to the Syria Project with Megan and Maria since I was able to spend less time writing and debugging code and more time thinking critically about the results the code was outputting.

The greatest joy of the retreat was definitely getting to know everyone there. Although I had worked closely with Sierra and MiKayla prior to the retreat, we got to connect more deeply on the retreat, both as friends and colleagues. It is immensely exciting for me to get to know people my age who care about this work as much as I do. I cannot wait to see the impact of the work they will do in their careers! I spent a large part of the retreat anxious about my future, specifically, trying to make a decision on whether to pursue a PhD or not. I had so many fruitful conversations with Megan, Daniel, and Bailey on this topic, during which they not only shared their wisdom but also expressed their support, calming my anxieties. I cannot thank them enough for helping me think through a hard decision. Overall, I would say that my favorite part of the retreat was gathering for dinner every evening. During dinner, we discussed a variety of topics from the intricacies of record linkage to Patrick’s crazy stories from abroad. I loved getting to hear about everyone’s interests, work and non-work related, share in their excitement, and benefit from their wisdom. From the technical lessons, the code reviews, the brainstorming sessions, the dinner conversations, and the late night nerd talks, I will take so much with me from this retreat. 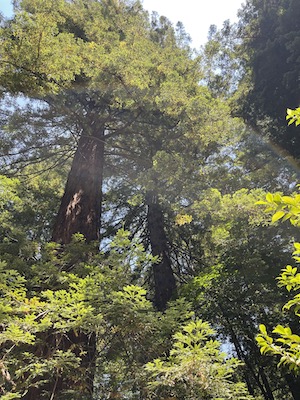 After inviting us to share our feelings toward the week ahead of us, Megan supplemented her prompts, kicking off the 2022 retreat by asking us to put forth our own definitions of success for the retreat. My personal image of success at the retreat looked something like this: I would go into the woods, pull out my laptop, put my head down, and come out a week later with a bunch of code to show for it. That was not what happened. What did happen was that I spent a long time looking at error messages that I vaguely understood, only to be reminded that I did not have to make sense of this confusion on my own. I was surrounded by people who not only were experts in this line of work but also actively went out of their way to offer their guidance. I felt much more prepared to tackle the task I had been struggling with after Jeff took time out of his short stay to sit down with me and refactor the script that had been looming over me. My visible frustration with canonicalizing a messy open text field led to assorted lessons on regular expressions from Rafe, who taught me about the syntax of this tool over a spiral ring notebook that traveled with us from the living room of our temporary home, to the car ride to a Tomales Bay oyster outing, and back to the living room again. Talks with Patrick about everything from random forest models to ergonomics to definitions of success in human rights work were a daily occurrence for the HRDAG interns, and conversations with Maria and Shira helped me navigate blocking records for multiple systems estimation for the first time.

When not helping me strengthen my technical skills, my HRDAG colleagues were unknowingly broadening the “liked songs” section of my Spotify. Patrick introduced me to “Busted in Utah”, a bluegrass homage to my home state, and through Daniel’s incredible piano-playing, I became acquainted with the Huayno “Waqanapata carretera.” I was also impressed by Robin’s familiarity with the lyrics of my primarily reggaeton-themed playlist which played in the background as we prepared mujadara for the group. But my most important takeaway from the retreat was neither a concrete technical skill nor refined music taste but rather a renewed sense of hope for my future in human rights work. Within a field that regularly reminds me of the inhumanity of the world, I found myself surrounded by a group of people dedicated to the fundamentally human goal of supporting each other in becoming the best, most equipped data scientists possible in order to combat injustice. While I may not have met my initial goal of leaving the redwoods having written a mountain of code, I found a new success condition along the way: to learn from the community in which I was fortunate enough to find myself and, hopefully, one day give back to it as well. 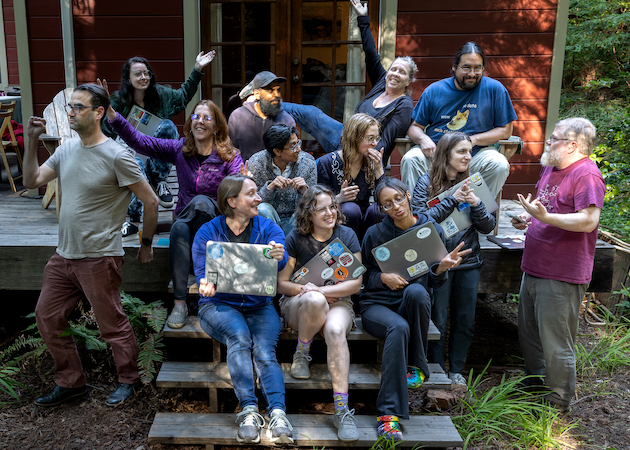