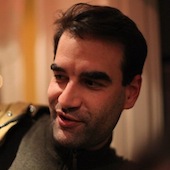 Rafe Kaplan worked as a software engineer in New York from 1996 until 2001, when he joined forces with Patrick Ball at AAAS and re-located to Washington, D.C. When HRDAG moved to Benetech in 2004, Rafe moved with the Group and stayed with them for three more years. In 2007, he joined Google, where he worked until 2015.

Rafe has an undergraduate degree in computer systems science from Victoria University of Manchester, UK (1996).