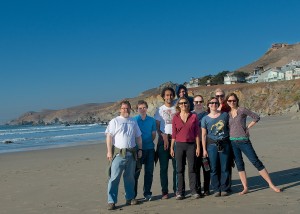 Ten data nerds gathered in a large hilltop beach house to analyze counts of killings from several war-torn countries. The time was January 16-20, 2014, the place was near San Francisco, the agenda was packed, and I was excited to be there.

Having defended my dissertation at Carnegie Mellon University just days before, I had often supposed that my thesis on a generalization of
log-linear models for capture-recapture might serve little other purpose than to fill a line on my curriculum vitae. This perception faded after a mid-2013 discussion with Patrick convinced me that HRDAG’s data challenges could easily be the best match to my research methods that will ever exist in the history of the universe, both in terms of the technical problem and the potential human impacts. I did not hesitate when Patrick invited me to the retreat to do multiple systems estimation on lists of homicides in Colombia.

Daily shared meals, walks to the beach, and star-lit hot tub sessions made the retreat far more than a place to apply a statistical method to new data. Participants from all over the world (Colombia, Germany, West Virginia …) and many universities (Essex, CMU, Mannheim, Harvard …) engaged in discussions as far afield as how to avoid problems related to climate change and how to measure the prevalence of human trafficking. Ann Harrison, the resident journalist, conducted interviews with each participant as part of her forthcoming book on HRDAG.

Despite these brief tangents, and a Saturday lunch trip for fresh oysters and local wine in an open-air cafe, HRDAG staff kept us on task by tirelessly expressing detailed interest in the work of each participant. Besides my project on Colombia, there was a record linkage analysis involving ten lists of killings in Kosovo, two experimental Bayesian capture-recapture frameworks, and a log-linear capture-recapture analysis of deaths in Syria. We gave progress updates and re-centered our efforts as a group each morning over breakfast.

An important part of the retreat consisted of sharing research methods with each other, with most of us spending almost as much time brainstorming about each other’s projects as we spent working on our own. We each took a turn presenting our work to the larger group. A typical evening began with a brief presentation, followed by a leisurely dinner, a post-dinner presentation, and then continued collaboration and hacking late into the night.