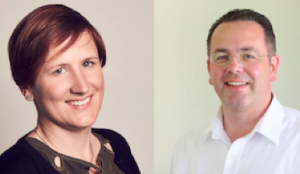 We are pleased to announce that HRDAG will be supported by two additions to our Advisory Board, Julie Broome and Frank Schulenburg.

We’ve worked with Julie for many years, getting to know her when she was Director of Programmes at The Sigrid Rausing Trust. She is now the Director of London-based Ariadne, a network of European funders and philanthropists. She worked at the Trust for seven years, most notably Head of Human Rights, before becoming Director of Programmes in 2014. Before joining the Trust she was Programme Director at the CEELI Institute in Prague, where she was responsible for conducting rule of law-related trainings for judges and lawyers from countries undergoing transition. Previously, she was a Programme Manager for Central and Eastern Europe with the American Bar Association’s Rule of Law Initiative, and a Programme Associate at the Henry M Jackson Foundation in Seattle.

“Having worked alongside the HRDAG team as a partner and later as a funder, I am thrilled to be joining the board of this organisation that brings much needed analytical rigor to the human rights and transitional justice fields,” says Julie.

Frank is the Executive Director at the Wiki Education Foundation, and he brings experience in nonprofit governance and organizational development. He is a former member of the Wikimedia Foundation’s executive management team, where he was responsible for overseeing the Wikipedia Education Program, Wikipedia Zero, and the evaluation of programmatic activities across countries. In early 2014 he took on his current role as the inaugural Executive Director of the Wiki Education Foundation.

“Producing unbiased, scientific results that bring clarity to human rights violence plays a key role in ensuring that violators get held accountable for their wrongdoings,” says Frank. “I’m thrilled to join an organization that applies rigorous research to large data sets in order to understand patterns of violence with the ultimate goal of providing statistical evidence of human rights cases.”

As we get ready to begin our fifth year, we are buoyed by the growth of our Board and by the knowledge, wisdom and enthusiasm they bring. As always, we’re indebted to our Board and our funders for their support and vision.

The addition of Julie and Frank has expanded our Advisory Board to five members. They’ll join David Banks, Dinah PoKempner and Michael Bear Kleinman.