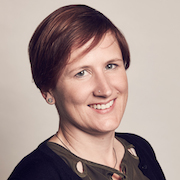 Julie Broome is the Director of London-based Ariadne, a network of European funders and philanthropists. Before that she worked at the Sigrid Rausing Trust for seven years in a number of capacities, most notably Head of Human Rights, before becoming Director of Programmes in 2014. Before joining the Trust she was Programme Director at the CEELI Institute in Prague, where she was responsible for conducting rule of law-related trainings for judges and lawyers from countries undergoing transition. Previously, she was a Programme Manager for Central and Eastern Europe with the American Bar Association’s Rule of Law Initiative, and a Programme Associate at the Henry M Jackson Foundation in Seattle.

Julie joined the HRDAG Advisory Board in October 2016.