When working with documents in an archive, every document offers the opportunity for statistical study and quantitative research. But a document can also offer the discovery of a story. That is the case with the disappearance of Ana Lucrecia Orellana Stormont, who was reported missing on June 6, 1983, at the age of 35.

Ana Lucrecia, a professor of psychology at the University of San Carlos, was scheduled to attend a meeting with Edgar Raúl Rivas Rodríguez at the Plaza Hotel in Guatemala’s capital city. Edgar, who also went missing, was a teacher at the School of Political Science at the University. (Ana Lucrecia’s case is explained more fully in Illustrative Case No. 22, documented by the UN-organized Commission for Historical Clarification (CEH)

The CEH report notes that the General Command of the Armed Forces rebels (FAR) reported that negotiations with the government were unsuccessful, leading to an October 26, 1983, release of two women whom they had retained. The approach by the FAR noted that as part of the counterinsurgency state, Maria Angela Ayala Saravia and others, including Ana Lucrecia, were to become part of a trade deal involving other captured citizens.

From this fact it was possible to identify several document sources mentioning Ana Lucrecia, which revealed a path for retrieving information. Each document provides us with a new tip, a new clue for answering questions such as, What happened to her? Or, Why Ana Lucrecia? 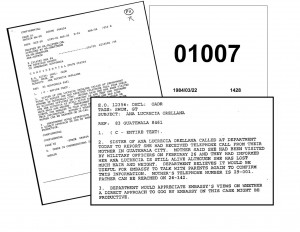 Before searching the Historic Archive of the National Police (AHPN) for clues, there were other places to look. The Oficina de Derechos Humanos del Arzobispado de Guatemala and the Recovery of Historical Memory (REMHI) Project created Guatemala Nunca Mas, which identifies testimonies that refer to Lucrecia Orellana Stormont, using the alias “Lucky.” These references note her year of birth as 1951 and mention Army records, especially an army base as a significant location in her death. (See the Nunca Mas site, testimonies 5071 and 1910).

The CEH also mentions that the parents of Ana Lucrecia went to the United States to expose the case twice, first in September 1983 and again in March 1984. The CEH also mentions that Ana Lucrecia was killed on November 5, 1983. In this same sense, the National Security Archive (NSA) document number 01007 mentions that her sister called the U.S. State Department in March of 1984 telling about the military’s visit to her mother in Guatemala. That document ends with the phase: ¨there is Congressional interest in this case.”

More searching reveals that the repository of the Forensic Anthropology Foundation (FAFG) contains a code for victim Ana Lucrecia: FAFG-FD-056-V01, recorded on September 8, 2009, her body not yet identified—so she was still missing.

From there we used the database of the NSA documents, the Guatemala Collection. This collection comprises 2,181 digital documents corresponding to documents declassified by the NSA, available for access at the General Archive of Central America (AGCA). Five documents mention her name, but the two we are concerned with are NSA number GU01007 and GU01011.

The document coded by NSA with the number GU01007, was created on March 22, 1984, which matches the date mentioned by CEH, reading “In March 1984 a family of Ana Lucrecia Orellana Stormont traveled back to Washington DC, and managed to meet once again with the same State Department official, who at that time confirmed the death of the victim and her political activism.” (More information here.)

The document is from SECSTATE WASHDC to Embassy Guatemala. The document states that the sister of Ana Lucrecia called the Department that day to report that she had received a telephone call from her mother, saying that she [the mother in Guatemala] had received a visit from military officers on February 26, 1984, to inform her that Ana Lucrecia was still alive, and she had lost much hair and weight. According to the document, the Department asked the U.S. Embassy in Guatemala to confirm this, saying: “Department would appreciate embassy’s views on whether direct approach to GOG [Government of Guatemala] by Embassy on this case might be productive.”

On April 6, 1984, the second NSA document, number GU01001, was issued—the response of the U.S. Embassy in Guatemala recounting that they met with parents of Ana Lucrecia on March 28, that the mother had not mentioned the visit by the military officers, but had mentioned that GOG officials had visited in November 1983, suggesting but not confirming that Ana Lucrecia was alive. The parents were convinced that many others, besides Ana Lucrecia, were being detained in clandestine prisons by the GOG. The document concluded: “Embassy does not believe a direct approach to the GOG in this case would be productive … Embassy believes that an approach by the family to the National Peace Commission, which includes the participation of the Minister of the Interior, the Minister of Labor and a military officer, would be more useful.”

With all this information, we had more possibilities for a productive search in the AHPN.

The document, or ficha, identified by number AHPN1199988, is a type of document used by police to register, in a condensed manner, the content of the documents related to a specific case. In the case of Ana Lucrecia, this ficha begins on July 6, 1983, one month after the kidnapping was reported. On September 13, 1983, November 18, 1983, and July 7, 1984, the police note that she was not captured by the Department (specifically Departamento de Investigaciones Técnicas or DIT). On April 17, 1984, the police report to General Management that they are making an investigation about her disappearance. And then in 1985 they inform the General Secretary of the National Police that the Criminal Department does not have a complaint about her disappearance.

We can learn from this document that the Criminal Department did not intend to undertake a real investigation. There are contradictory notes from different dates stating that they have not captured her, then that they are investigating, and then finally that they have no complaint.

There are other documents. One created on June 6, 1983, shows that the parents were interviewed and that information about Ana Lucrecia is underlined, such as the name of her father and the name of the University where she taught. These clues help us to get a little closer to understanding why she was targeted.