The Great Lessons in Research at the Archive 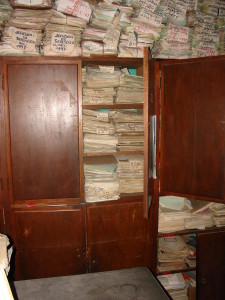 Doing an investigation on the contents of the Archive brought with it three major lessons. The first big lesson was the constant movement (nothing was static), The second great lesson was that everything evolved (the changes were a constant). The third major lesson was to discover how two institutions can work together while geographically far apart.

As there were other processes being carried out at the Archive, everything was in constant movement. In other words, one day the documents were in X location and tomorrow they may be in location Y or dispersed in multiple locations. This made it impossible to know with certainty the time it would take to extract a representative sample for the quantitative analysis. Ultimately, 11 different samples were designed, which made it possible to interrupt or suspend the process at any time without altering the analysis process.

These parallel processes made it difficult to locate documents in the sample.  Particularly in the first 9 iterations we were like explorers looking for the shelving, the platform or file cabinet that contained the documents that corresponded to the sample, which significantly increased the search time.

However, the selection of documents by iterations or steps allowed us to constantly review the guidelines and respond to the needs of the investigation.

Furthermore, and in response to the constantly changing location of the documents, it was necessary to review the way the documents were selected to be sampled. This allowed us to discover a more effective method for extraction.

After the ninth iteration, HRDAG made the decision to expand the sample size and to look for documents according to a coordinate into space instead of by the different rooms of the building.

Another change brought on by the form of sample selection was the amount of information units per sample point. In the first nine iterations we selected three sets of related documents; in samples 10 and 11, ten sets of the documents were selected.

With this change we increased the number of documents per sample point, ensuring a greater volume of data, and thus improving the analyses. This increase also made it possible to determine whether documents with similar physical conditions (burned, wet, mutilated, or growing fungus) originated in a particular police structure or if they were located in the same physical building .

Another element related to the theme of change and movement were the human and physical resources of the work. On the one hand there was always an average of 12 people coding, 6 people typing, and 3 people monitoring the work. However, being a process that took many people over eight years, these people were not always the same. But thanks to the manuals and guidelines, the process was consistent across changing individual team members.  However this did require constant reinforcement and training to ensure that manuals were understood and applied consistently.

Although the project itself has been in progress for eight years, it took about four years to extract the total sample of about 18,000 documents, which were selected over 11 samples between 2006 and 2010.

The multidisciplinary work and collective work across distance

A feature of this investigation was the sharing of responsibilities between HRDAG, and the local AHPN team.

Although there was always advice and support, there were certain times and tasks that depended entirely on the local group and other times entirely on HRDAG. However, when it was time to analyze the data and calculate results, it was necessary to bring to the table all learning and experience gained and consider each step in the process: calculation and selection of the sample (these two steps correspond to HRDAG), extraction, coding and typing of the sample (AHPN team), weight calculation (HRDAG), quality review (AHPN team), calculation of estimates (HRDAG) and analysis and interpretation (HRDAG and AHPN together).

So we learned that it is necessary to have a constant and fluid communication to meet the criteria considered in each of the steps. In conclusion we can say that is and has been a collective and interagency project.

[Creative Commons BY-NC-SA, including photos]  All photos courtesy of AHPN.