Ten Years and Counting in Guatemala 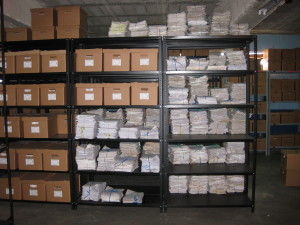 Organized police documents at the AHPN.

We have accomplished so much in the last 10 years at the Historical Archive of the National Police. And yet, despite the efforts, dedication, and commitment of each person who since 2006 has worked in the AHPN, we still can not say “mission accomplished.”

In 10 years the environment at the Archive has changed so much and become so full of life. Where the building once sheltered unknown stories, over time some of those stories have been revealed. But Guatemala has a long way to go in letting the world get to know more deeply about the secrets within the documents stored there.

Guatemalans and the rest of the world have a very important tool for learning about our stories from one of the protagonists: the former National Police. Thanks to the commitment and professionalism demonstrated during these 10 years, documents have been organized and made available to the world, and they are available to anyone in the world with the click of a button.

This Archive holds not only the secrets of history still to be learned about the recent history of Guatemala, but also the institutional history of the National Police itself. The files within the Archive are administrative files, records generated and safeguarded from 1892 to 1996.

I end this reflection with an invitation for anyone interested in history or human rights to learn more about this invaluable source of information, since it is the largest documentary deposit ever made available in Latin America: 8 kilometers of paper are waiting to be known. More and more students, professionals, families of victims and the general public are represented by those who come to the Archives, but we need to continue spreading the word. There is so much to be learned, seemingly limitless, ranging from quantitative to qualitative research, in this repository.