Reflections: HRDAG Was Born in Washington 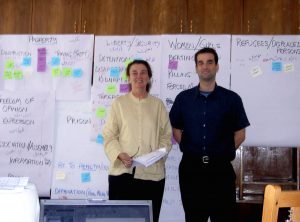 I began working with HRDAG in the summer of 2001 before it was ever even called HRDAG. In fact, not intended as a boast, I think I’m responsible for coming up with the name. After contracting with Dr. Patrick Ball for a time writing the Analyzer data management platform, I left New York City and joined him in Washington, DC, at AAAS in 2002. Soon after starting, Patrick decided to establish an identity for this new team, consisting mainly of myself, Miguel Cruz and a handful of field relationships. We discussed what to name it briefly in the AAAS Science & Policy break room, which at the time, being in the mind of unclever descriptive naming schemes (such as Analyzer), I suggested the Human Rights Data Analysis Group, pronounced H.R. Dag, because that’s what we did. Evidently this suggestion was accepted, although it might have been helpful if our Australian colleague, Romesh Silva, had pointed out that the word “dag” had already taken on its own particular meaning Down Under.

I only spent only one year in DC at AAAS, and while a short time, it was for me a fairly transformative year. While it was not the first time, I moved out of my home city and had to learn new ways. For one, at 30 years old I learned how to drive, mainly on Patrick’s old Volkswagen Golf, the poor thing. I was also briefly rendered homeless when my basement apartment was washed out during an unusually heavy downpour. Mostly, working on an effective effort for human rights changed the way I viewed the world. Working on projects outside of the headlines showed me how many more things were going on than I was previously aware. Going to other countries and meeting dedicated, like minded people showed how different people realities and needs were despite our essential similarities. It showed me how central good society is to the well being of all.

Most unexpected was when I was asked by Patrick to visit Afghanistan in 2003 to help the Afghanistan Human Rights Commission set up a rights monitoring system. This kind of project was not typical for our group as it really ended up being about individual case management rather than pattern measurement. My primary task seemed to be convincing those involved that this was the case, and set them up to use a combination of Martus and a custom Access database for the purpose. I can’t speak with certainty about the success of the project, overall, but it surely was an experience that left me changed. Of the projects I worked on with HRDAG, the Afghanistan project was the most independent project, even more so than Analyzer, and one where I learned the most about working with the international community and the UN. I learned how one part of a sprawling organizations like the UN can indeed work toward very different ends than another. At times, I could depend on critical help, as I did from a local geographical unit, in an area where such information would be scarce. Most other times, my most direct contact was with UNAMA, which had very different goals from HRDAG and the organization that had hired us. It seemed the natural result of the UN being responsible for a diverse set of needs spanning many aspects of International cooperation in the country.

After that year, the entire HRDAG team, now suitably and portably named, packed up and moved to California to join Benetech, where I worked with them for several more years. I continue to take these unique experiences with me  into other areas of life, and cherish the impact, no matter how small, from that time.