Quantitative Research at the AHPN Guatemala 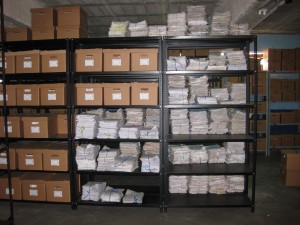 Files at the AHPN / M. PRICE

In early 2006 I joined the Historical Archive of the National Police (Archivo Histórico de la Policía Nacional, or AHPN) without knowing the impact it would have on my future. I started with cleaning, organizing and classifying documents—and learning, with other colleagues, what a historical archive is and how it works.

By April of that year, parallel to these learning processes, I was selected along with 20 other people to begin work on the challenging Quantitative Research project. I started as a “coder,” transferring key content from documents into a database.

In developing this research the Archive looked for advice from Patrick Ball and his HRDAG team, who at that time were a part of Benetech. With him the operational part of the project was provided by Tamy Guberek and Daniel Guzmán. They brought new knowledge and experience to the project. New concepts were incorporated into our vocabulary, such as “inter-rater reliability,” “Martus,” “sample,” and others. At the same time, we were also learning about the archival process, integrating even more words into our vocabulary, such as “documentary collection,” “archive document,” “series,” “documentary type,” and more.

Over time (by late 2006) I shifted within the project, and changed roles—instead of being a coder, I became a team leader (of other coders). Over time I discovered that

each team member brought much knowledge to this research. I also learned how each project in the Archive can interconnect and complement each other.

Looking back on that time, I remember one of Tamy’s visits to Guatemala when she said (wisely) that part of the work should be documenting each of the criteria and changes made during the project with respect to the sample collection process, encoding of documents, or any other aspect in connection with the investigation. This advice became my ABC for work, and as a result, eight years later, when we write reports on results, we can defend and describe every decision made at every moment along the way. 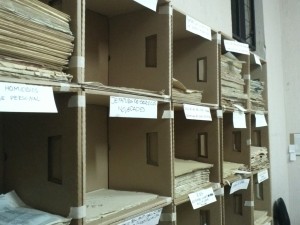 This advice also opened the door to AHPN to expand the research process and allowed us to enrich the manuals by creating and systematizing new instruments that reflected the content of the documents. We did not replace the initial questions motivating our investigation, but rather  we let the investigation evolve according to what we learned from the documents and the knowledge contained in the historic archive.

Another tip from Daniel and Tamy upon the start of the training was this: Let the documents speak, meaning codify what the document says, and try to avoid interpreting the content. This guideline has been very helpful in the process of coding the documents, as every document is different, but the contents are in similar formats. We learned that the police used various formats and styles of writing for similar content. We also learned specific terms used by police officers to describe actions (like the classifications of acts as “detention” or “capture”). Without that advice and guidance, we could not say with much certainty today. This tip was operationalized through the development of a controlled vocabulary, essentially a list of words and phrases used to code the document contents into a database.

Finally my most recent step in the process has been to join the team of systematization, writing and analyzing the results obtained up to the official publication of the research itself.

Personally this route in the project has meant more than it might seem, as each new facet of knowledge acquired was implemented for my own education. Parallel to the process of extraction and sample coding, I finished my undergraduate studies. While we were preparing for an expert testimony in Guatemala, I was working on my thesis as a sociologist. Now years later, learning new tools for the design and drafting of reports for publication (using LaTeX, version control, and R) I am applying the knowledge to my work on my masters thesis.

I think this research has allowed me to grow in many facets of my life and has allowed me to explore and discover my potential in different processes within the same investigation. And the next step is yet to be discovered.