For María Mari-Narváez, a recent decision by the Supreme Court of Puerto Rico was both a victory and a moment of reckoning. The Court granted Kilómetro Cero, a citizen-led police accountability project in Puerto Rico, full access to every use-of-force report filed by the Puerto Rico Police Department since 2014. 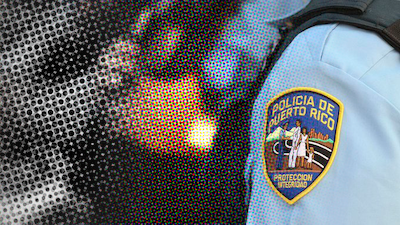 The decision will make it possible for advocates such as Mari to get a clear picture of how state police officers are using force, and when that use of force crosses the line into abuse. But the court victory flooded her small organization with data.

“We won, finally, and then I realized I was going to be receiving thousands of documents that I had zero capacity to process,” says Mari.

“One of the things that’s important to me when analyzing data is to find out where the gaps are, why those gaps exist, and what those gaps represent.” —Tarak Shah, data scientist

The Court made its decision in April 2021, and the police department started handing over PDF files in July. By the end, there could be up to 10,000 documents that get turned in. In addition to incident reports, the police had to provide their use-of-force database. Combined, the victory provides a complicated mixture of quantitative and qualitative data that can be analyzed to answer questions about what the state police are doing to its citizens during police interventions. In particular, Kilómetro Cero, which Mari founded, wants to find out if some Puerto Ricans are more likely to be victims of police violence than others.

“We’re looking for bias,” says Mari. “Bias against poor people, or people who live in a certain neighborhood. Gender bias. Language bias. Bias against drug users, sex workers, immigrants, people who don’t have a house. We’re trying to analyze the language of vulnerability.”

Mari describes herself as a lucky person, which is how she explains being able to team up with the Human Rights Data Analysis Group to get help with processing the thousands of documents. Following up on tip from a justice fellow at the Open Society, she found herself in conversation with Megan Price, HRDAG’s executive director.

“It was very easy for Megan to see what we were trying to do,” says Mari. “She said, ‘Yes, we’ll collaborate and give you technical assistance,’ and it was very easy, very organic.”

Megan’s first project at HRDAG was working with the Historic Archive of the National Police in Guatemala, so she knows the value of building and analyzing databases based on police records.

“Official police records provide a valuable window into what police choose to document, and how they do it,” says Megan. “But when a small community organization gets flooded by a windfall of data, they need data scientists to help them organize the data and make the most use of it.”

With thousands of documents arriving at the organization, HRDAG data scientist Tarak Shah worked with Kilómetro Cero’s junior analyst, Luis Emilio Muñoz, to pair incidents found reported in the PDFs with incidents recorded in the database. Every case in the database is supposed to have a matching incident report. By pairing them, Tarak and Luis were able to find out what was missing.

“It took [the police] the longest time to hand in these documents. I think they thought we wouldn’t be able to realize we were missing docs,” says Mari. “They didn’t count on the fact that we had Tarak.”

Tarak is still pairing, and he is able to flag not only where data is missing, but also where the information from police is inconsistent. Mari is litigating to get a judge to demand the police hand over what’s missing. In response to finding out about the missing documents, the police have said that most of the serious incidents in question are “under investigation,” which is why they haven’t turned over the documents.

“One of the things that’s important to me when analyzing data is to find out where the gaps are, why those gaps exist, and what those gaps represent,” says Tarak. “In this case, we found that a disproportionate share of the incidents for which we were missing documents were associated with the highest level of force, which is lethal force.”

While processing the documents, Tarak is also helping to set up the database that will be used to analyze data to answer questions about state abuse by police. Working closely with the team, he’s helping to set up categories that will allow analysts to look into violence by race, gender, language, and so on. Kilómetro Cero recently produced a report that looks at these nuances. In terms of reporting on homicides by police in Puerto Rico, Mari says that thanks to this project, they’ve been able to “get to a better number that feels more like the truth.”

The name of the organization, Kilómetro Cero, is a nod to two lynchings that took place in 1978 in Cerro Maravilla. It was there that police killed two activist college students who begged for mercy after being entrapped. The murders sparked a national controversy and inquiry into police wrongdoing and cover-ups.

One of the analyses Kilómetro Cero is making now is a comparison of police killings in Puerto Rico and police killings in the non-territorial United States*. Overall, the rate in Puerto Rico is lower—about 3.1 killings for every million people, compared to more than five per million in the US. But that rate increases significantly, Mari reports, among people who live in racially mixed neighborhoods, and among people with more Afro-Caribbean ancestry. They’ve also looked at the percentage killed among people who are carrying a firearm compared to those who are not: in Puerto Rico, many fewer people carry firearms, so the rate of unarmed people killed is much higher.

Mari was first inspired to do this project when she saw that so many Black men and boys were being killed by police in the US. She was convinced that it must be happening in Puerto Rico, too, but that there were no publicly available data on police killings.

“The racial part is very, very important for us,” she says, “because in Puerto Rico, racial dynamics are different. Here, everyone is Puerto Rican, and people think we’re not racist, because we’re mixed, but it’s not true. There is systemic racism, but it’s harder to approach because people don’t acknowledge it.”

Prior to this project, she says, people thought that the populations most abused by the police were poor people. But because of the analysis that’s underway, it’s becoming clear that racial bias plays a big role in use of force by police. The database that Tarak is helping to build will be instrumental to teasing out the biases at work in police interventions. The organization will look at killings, injuries, vulnerabilities, and more. He’ll be able to collaborate with Kilómetro Cero’s research director, Luis Alberto Avilés, on some of the upcoming analyses.

“I’m pushing for a great database,” says Mari, “and Tarak is like, ‘Okay, yeah, send me everything you want.’”

Mari is still feeling lucky to have found her way into a collaboration with HRDAG, especially since in her experience it’s difficult to get people in the US interested in projects in Puerto Rico—“unless there’s a big hurricane like Maria,” she says.

“It’s not that easy to get attention from organizations, but [HRDAG] was just interested,” says Mari. “They have worked in Guatemala, in Colombia, they have that vision of internationality, and that was important, and they have a vision of working wherever there’s need and will and capacity to execute a project.”

*By “non-territorial United States,” we refer to the 50 states and federal district, not including territories of American Samoa, Guam, the Northern Mariana Islands, Puerto Rico, or the U.S. Virgin Islands.