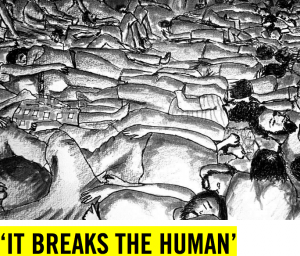 Today Amnesty International released “‘It breaks the human’: Torture, disease and death in Syria’s prisons ,” a report detailing the conditions and mortality in Syrian prisons from 2011 to 2015, including data analysis conducted by HRDAG.

The report provides harrowing accounts of ill treatment of detainees in Syrian prisons since the conflict erupted in March 2011, and publishes HRDAG’s estimate of the number of killings that occurred inside the prisons.

To accompany the report, HRDAG has released a technical memo that explains the methodology, sources, and implications of the findings. The HRDAG team used data from four sources to find a total of 12,270 fully documented, identifiable people killed while in detention. The team of scientists then used multiple systems estimation (MSE) to estimate the number of undocumented killings in the prisons during the same time period—the estimated total (documented and undocumented) deaths is 17, 723 (95% credible interval (13,409, 18,713)). In effect, 25 percent of the killings in detention were unreported. The estimate includes only those killed while in detention and does not include the “field executions” of soldiers who were killed, for example, for refusing to fire on civilians.

The estimate of 17,723 killings is a conservative estimate. “It’s likely that this is an under-estimate because of strict criteria we used to classify killings and the extreme difficulty of collecting information about what happens in detention centers,” says executive director Megan Price.

The memo’s authors are executive director Megan Price, Anita Gohdes, and director of research Patrick Ball. Jule Krüger and Kristian Lum also contributed to the report, as did Michelle Dukich and Christopher Dukich.