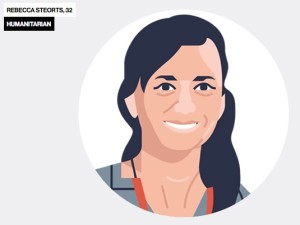 We’ve known for years that Beka Steorts is on the cutting-edge of statistical science, and now The MIT Technology Review has realized the same. Last week she was named one of 35 Innovators Under 35, in the category of humanitarian.

We first became familiar with Beka’s work in 2013 when she was a visiting professor at Carnegie Mellon and was introduced to us by Prof. Steve Fienberg. Since then, we’ve felt very fortunate to collaborate with her on projects such as the UN enumeration of casualties in the Syrian conflict, and we look forward to many more years of work with her. She is one of several young stars we include in our superheroine hall of fame, which includes Anita Gohdes, Amelia Hoover Green, Jule Krüger, Kristian Lum, Shira Mitchell, and our director of research Megan Price.

Here’s an excerpt about her work on the Syria project, from MIT’s bio:

In 2013, Steorts realized that by combining a Bayesian statistical approach with a machine-learning technique called blocking, she could reliably merge the databases—and do it in less than a day.

Blocking works by placing items that are similar to one another—say, similar names or approximate dates of death—in the same group for comparison. (A simple analogy: if you were trying to compile one whole set of cards out of two incomplete decks, you’d separate them into suits first and then discard the duplicates.) Only after it has assembled the various blocks does Steorts’s software do the intensive work of linking individual records.

“Working with HRDAG, Steve Fienberg, and other very amazing individuals has shaped how I think about applied problems in general, but also about humanity and how our work as applied statisticians is much larger than one individual,” says Beka. “This award is not mine — it belongs to those who have died in Syria from horrible crimes and to their families. Our work is about the collaborative nature of many people coming together and working on a problem that matters, and it has incredible impact in statistics, in human life, and also in the potential for shaping public policy. The group of people I work with are incredible — they’re passionate, smart, caring, and determined to do principled work that matters. In terms of how this has affected me, there is nothing better than working on a problem that matters, that allows you to redefine yourself, your work, and your creative process. All in all, it takes you beyond the rudimentary sphere of life. I can think of nothing greater or more humbling.”

Here’s a video of Beka delivering a talk at EmTech 2015.