Learning Day by Day: Quantitative Research at the AHPN 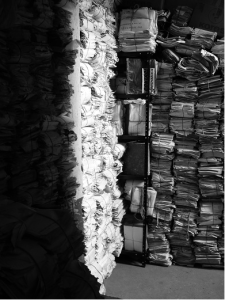 Working at the Historic Archive of the National Police (AHPN) of Guatemala, there are many skills I learned on the job. My many years of work on the team that studies the recovered documents have been like a custom-made course in how to do quantitative research.

The Archive documents I study are the result of 36 years of creation during civil war (1960 to 1996). Many of these documents are simply administrative—but we are able to use them to understand patterns that occurred during the conflict, to get a sense of what mattered to the National Police and what didn’t. Our quantitative research shows us the Police behavior in broad strokes. But it is just the beginning, and it gives us the key to what questions to ask next.

Here are some of the things I’ve learned on the job.

The methodology we use was designed to address the conditions of the Archive, because there was so much clutter, with some documents stashed in mountains of paper, and others stored in stacked packages, boxes, or sacks known as costales. Many of these stacks and boxes were found on the floor or on shelves that touched the ceiling.

Since the discovery of the Archive in July 2005, many of the documents have been in constant motion, headed to their respective archival intervention either for cleaning, organization or preservation. This, combined with the sheer amount of paper that makes up the Archive (about 8 kilometers), made ​​the methodological strategy was unique.

One of the challenges was to take the document and return it exactly as it was to its location when I extracted it. When I took a document from a box, it was necessary to leave some sort of notation to help me return it to the proper box. In an organized file system, this would not be very complicated, but under the conditions in which the sample was extracted, moving a document from its site could mean losing the logic in the process of subsequent organization. (It is worth mentioning that about five percent of the documents have been sampled by some of the archival procedures so far.) 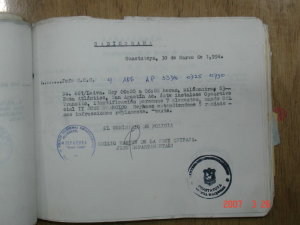 Another thing I had to learn on the job was the construction of manuals and vocabularies. Today I could not imagine doing this investigation without them. For each interpretation I apply to a a sample, I need to know more than just the  political and social context of the period.

For this work, I need to know how the data was calculated, which universe was used, and whether it had any particular criteria. I also need to know what criteria were used to encode, and what options they had from the vocabularies they were using. Some appendices have included the “limit condition,” which has methodological value.

In other words, in some cases it was necessary to give a definition of what was sought, but it was also necessary to explain what was not sought, to define the boundaries or limits that should be considered for coding. For example, it’s important to understand the difference in a documentary type called “telegram,” when another is called a “message.”

Another skill I’ve learned it how to count. It sounds simple, but it is not, especially when talking about content in these documents.

For example, it’s important to know what each record or document recorded, that is, what they wanted to tell us. Some documents record events; others record people. A death that occurred in a specific place at a specific time could be counted as one event (with multiple victims or “recipients of acts”) or as N number of deaths with a victim (person) each. This is important when making the respective interpretations and analysis.

I have also learned to code using terms that are low on emotion. For example, instead of classifying a person as a “victim” or a “perpetrator,” I’ll use a more neutral term like receptor de hecho, or “recipient of the act.” I am also careful to not classify acts as violations of human rights, or as crimes against humanity. These classifications can be made by other experts in academia or justice systems—but when it comes to interpreting the data, we do not code these emotional terms from the information presented on the ficha.

Learning how to do this research provides an opportunity to see this methodology replicated in other settings, or at the Archives. Doing quantitative research does not hinder other processes, and it does provide comprehensive understanding of documents’ contents.

In these ways, my years at the Archive have felt like a personal pilot study.