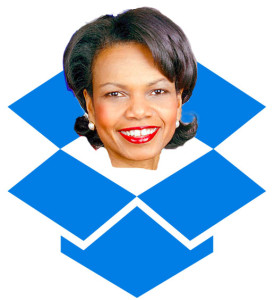 On Wednesday, April 9, the file hosting service Dropbox announced the addition of Condoleezza Rice, former U.S. National Security Advisor and Secretary of State, to their Board of Directors, citing the need for “a leader who could help us expand our global footprint.”

In response to this announcement, HRDAG requested (and rapidly received) a refund for our recent purchase of Dropbox for Business, and will drop the use of their service entirely.

Patrick Ball, HRDAG’s Executive Director stated: “As a human rights organization, we find Condoleezza Rice’s complicity in the serious human rights abuses of the Bush administration very worrying. But most importantly, her enthusiastic support of mass surveillance makes her particularly inappropriate for the Board of a cloud storage service. Why should anyone trust Dropbox with their data now?”

Shortly after the Rice announcement, a “drop-dropbox” website appeared, offering folks “fantastic alternatives” to the service, some of them fully encrypted and open-source. The site states:

“Choosing Condoleezza Rice for Dropbox’s Board is problematic on a number of deeper levels, and invites serious concerns about Drew Houston and the senior leadership at Dropbox’s commitment to freedom, openness, and ethics. When a company quite literally has access to all of your data, ethics become more than a fun thought experiment.”

Two days after the announcement about the addition of Rice to their Board, Dropbox’s CEO made this statement on his blog, excerpted here: “We’re honored to have Dr. Rice join our board — she brings an incredible amount of experience and insight into international markets and the dynamics that define them.”

She brings much more than that, and as we’ve written in an earlier blogpost, we believe that human rights groups depend on internet privacy. Without privacy, they cannot be safe in their collection of information about mass violence.

For her part, Rice, speaking with Bloomberg Wednesday, said: “As a country, we are having a great national conversation and debate about exactly how to manage privacy concerns. I look forward to helping Dropbox navigate it.”