Report on Measures of Fairness in NYC Risk Assessment Tool 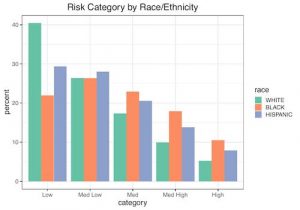 Today HRDAG published a report titled, Measures of Fairness for New York City’s Supervised Release Risk Assessment Tool, an analysis based on datasets provided by the Criminal Justice Agency (CJA), a nonprofit organization, and the New York State Division of Criminal Justice Services (DCJS). The report is one response to concern expressed by advocates and researchers regarding risk assessment models. The report tries to answer the question of whether a particular risk assessment model reinforces racial inequalities in the criminal justice system.

In the report, co-authors Kristian Lum and Tarak Shah evaluate a specific risk assessment tool used in New York City; the tool was designed  by CJA as a statistical model to predict the likelihood that an arrested person, or “defendant,” will be re-arrested for a felony during the pre-trial period, and was used to screen defendants for acceptance into a pretrial supervised release program. The report was based on several common measures of fairness.

“An important lesson from this process is the need for transparency in the development of these risk assessment tools,” said Tarak Shah, data scientist at HRDAG. “It was only through the process of trying to re-build this model from the original training data that was provided to us that we discovered that the scores used in the tool do not come directly from the model-fitting process.”

Some of the key findings of the report include:

The report was supported by the The Ethics and Governance of AI Initiative, the Ford Foundation, the MacArthur Foundation, and the Open Society Foundation. Data were provided by the CJA and DCJS, although neither organization or agency was involved in the writing of the report.