We’re very happy to announce that our executive director, Patrick Ball, has been elected as a Fellow of the American Statistical Association (ASA), as announced by ASA President Nathaniel Schenker. Patrick is one of 63 new ASA Fellows to be honored this year in a ceremony at the Joint Statistical Meetings, which will take place this August 5 in Boston, Massachusetts.

“I congratulate Patrick on being honored as a new ASA Fellow,” said Schenker. “His accomplishments have contributed greatly to the advancement of statistical science and have rightfully earned him the respect and admiration of his ASA peers.” 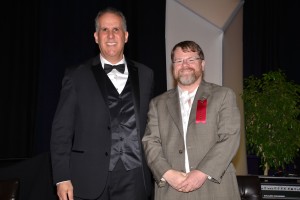 Patrick has worked for 23 years at the intersection of statistical science and human rights work, and the ASA honors him for leadership and outstanding professional contributions to statistical science. He was nominated by his peers in ASA membership.

David Banks, a professor of statistical science at Duke University and an Advisory Board member of HRDAG said, “As a long-standing member of the American Statistical Association, I am proud that my organization has recognized the pioneering work that Patrick Ball has done for the statistical methodology behind human rights research, above and beyond his many courtroom contributions to win justice for the victims.”

Echoing that sentiment, Nicholas Jewell, a professor of biostatistics and statistics at the UC Berkeley School of Public Health and also a member of the HRDAG Science Advisory Committee, said this: “I am so glad that Patrick’s research into the application of statistical and computational ideas to addressing human rights issues is being recognized in this way. Fellowship in the ASA is an incredibly prestigious honor, reserved for the few, and I think Patrick’s award also recognizes his extraordinary leadership in the human rights arena and his bringing these problems to the attention of statisticians worldwide. He has had, and continues to have, a major impact on both human rights investigators and statisticians.”

Fritz Scheuren, Senior Fellow and VP at the National Opinion Research Center and a member of the HRDAG Science Advisory Committee, has been a long-time adviser and invaluable mentor to Patrick. In his nominating letter, Dr. Scheuren cited Patrick’s infectious leadership style and his tireless efforts. “Holding perpetrators of State-sponsored terror to task, in so far as a statistician can, is a thankless and exhausting undertaking, yet Dr. Ball has not slackened in his efforts,” he said. “He had and still has an ability to cross over color, gender, culture, and language barriers—to reach out internationally, especially in a way that is remarkable for an American.”

“I’m deeply honored by the ASA, and I’m very grateful to Fritz and those who wrote seconding letters for proposing me,” said Patrick. “I look forward to celebrating in Boston in August—and of course, to doing more statistics in the service of human rights.”

About the American Statistical Association

The American Statistical Association is the world’s largest community of statisticians and the second-oldest continuously operating professional society in the United States. Its members serve in industry, government and academia in more than 90 countries, advancing research and promoting sound statistical practice to inform public policy and improve human welfare. For additional information about the American Statistical Association, please visit the ASA website.