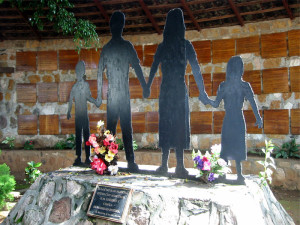 Gen. José Guillermo García, El Salvador’s defense minister from 1979 to 1983, may be deported from Florida to El Salvador because of his involvement in war crimes that occurred under his command. The recommendation comes from a Miami immigration judge, whose decision was supported with expert testimony from Stanford political science professor Terry Karl, who presented extensive statistical analysis of killings, disappearances, kidnappings, torture and other crimes under Gen. García’s watch. The statistical analysis was a joint effort between Professor Karl and Amelia Hoover Green and Patrick Ball of Human Rights Data Analysis Group (HRDAG).

The case against Gen. García, who has been living in Florida under political amnesty since 1990, was brought by the Human Rights Violators section of the Department of Homeland Security/Immigration and Customs Enforcement. Professor Karl served as Homeland Security’s expert witness. Other witnesses included Robert White, a former U.S. ambassador to El Salvador, and Juan Romagoza, a Salvadoran who testified regarding his torture. The overall effort was supported by the San Francisco–based Center for Justice and Accountability (CJA), the George Washington University–based project National Security Archives, and of course, many human rights and immigration lawyers.

“One of the reasons we got such a beautiful decision,” said Karl, “is that we marshaled evidence through narrative, through witnesses, and through statistics, all together. The evidence was overwhelming.”

Some of the war crimes in which Gen. García was involved include the infamous 1981 El Mozote massacre, in which nearly 1,000 residents of El Mozote—all of them civilians and at least 250 of them children—were killed by the Salvadoran Army’s Atlacatl Battalion. He was also involved in the 1980 assassination of Archbishop Óscar Arnulfo Romero at the altar during mass, and the 1980 abuse and murder of four American churchwomen.

“Through Juan [Romagoza], Ambassador White, the narrative, and the statistics, we gave a voice to all the people who can’t give voice in U.S. court. The statistical analysis added volume to the meaning,” said Karl. “We were able to show very graphically that Gen. García’s deliberate actions and inactions gave a green light for murder and repression. In addition, because the work of HRDAG could put names on so many victims through the statistical work, the injustice of their suffering or deaths was at least acknowledged in a court of law, something that El Salvador has yet to do.”

In court, Professor Karl showed the deliberate military policy to kill civilians, especially in rural areas, and altogether documented 59 massacres carried out by the Salvadoran armed forces, using 11 “illustrative cases.” The immigration judge, Michael Horn, found that García knew—or should have known—of these 11 violent episodes, including the following massacres, which are in addition to El Mozote: Rio Sumpul (1980), San Francisco Guajyoyo (1980), Soyapango (1981), El Calabozo (1982), and Las Hojas (1983). In all these cases, he found, the General should have taken measures to stop the massacres and failed to conduct adequate investigations of the crimes.

Amelia, one of the HRDAG scientists who assisted Karl in the analysis, said, “This is a case in which the fact of missing data is particularly poignant: the data presented in General Garcia’s case are overwhelming, but they represent just a subset of the atrocities committed under his command.”

The decision was made on February 26, and made public only recently, after a Freedom of Information Act (FOIA) request by the New York Times. Although the deportation of Gen. García, age 81, will not happen quickly and certainly will be appealed, the ruling is a significant recognition of Gen. García’s role in war crimes.

According to the New York Times article, a human rights law passed in 2004 has allowed for deportation proceedings against criminals like Gen. García. Last year, in April 2013, another Florida immigration judge ordered the deportation of Gen. Carlos Eugenio Vides Casanova, who commanded the National Guard from 1979 to 1983 and who was involved in the killings of the four American churchwomen.

In January 2013, Professor Karl, using statistical analysis created with Amelia and Patrick, served as an expert witness in a case brought by the Department of Justice against El Salvador’s former Vice Minister of Public Security, Col. Inocente Orlando Montano. Col. Montano held command responsibility for the 1989 Jesuit massacre, also in El Salvador. More recently, he was discovered to be living illegally in the U.S., having lied about both the date of his entry and his service in the Salvadoran armed forces. Sentencing has been postponed, but Col. Montano could do jail time. (More on Col. Montano’s case in this blogpost.)

“My work in human rights began with the non-governmental Human Rights Commission of El Salvador in 1991. When I started building databases for them, my human rights colleagues had already been collecting evidence on Gen. García, Gen. Vides Casanova, and Col. Montano. They were at the top of our databases, and decades later, a small measure of justice is finally being brought for their crimes,” Patrick said.

García, Vides Casanova, and Montano held military positions during El Salvador’s 12-year civil war between the right-wing military and leftist guerilla groups. The civil war lasted from 1980 until 1992, when a peace accord was signed.

This CJA press release tells more about the case against Gen. García.