Speaking Truth to Power in Chad

Leading this research and advocacy effort has been AVCRP’s Souleymane Guengueng and HRW’s Reed Brody. Souleymane spent more than two years in detention after being unfairly imprisoned during Habré’s presidential reign, where he suffered torture and cruel, inhuman and degrading treatment at a prison managed by the then state security forces, the Documentation and Security Directorate (DDS). Since his release, he has painstakingly collected testimonies from fellow survivors of human rights abuses during the Habré presidential period in Chad with support from the team at HRW. In 2001, Reed Brody discovered tens of thousands of DDS documents at the abandoned DDS headquarters in N’Djamena, Chad. Reed and Souleymane contacted HRDAG in 2001 for assistance in organizing and analyzing the administrative documents recovered from the DDS and the masses of data collected directly from victims.

The administrative documents recovered from the former DDS headquarters included prison situation journals and prisoner death certificates – detailing the routine processes and observations of the DDS as well as its internal and external communications. After HRW scanned the documents, we worked closely with HRW to design a coding scheme to recover the content of the documents and their metadata and organize the information into a database. In our initial analysis of these records, we found direct mention of 12,321 unique prison inmates including 1,208 individuals who died in detention. In the recovered documents, acts of arbitrary arrest, detention and torture are also mentioned. Further, from the DDS’s own situation journals and prisoner death certificates, we calculated that the mortality rate within the DDS prisons varied from 30 per 1,000 to 87 per 1,000 prisoners – i.e., detainees within the DDS prisons were at least 16 times more likely to die than the general public. These findings placed individual victim, survivor and eyewitness testimonies collected by Souleymane and Chadian human rights groups in context.

The bureaucratic records of the DDS were also critical in helping us build an understanding of what the DDS knew about prison conditions during President Habré’s reign and how it communicated this knowledge within its own ranks and up to President Habré’s office. In human rights terms, we were able to use the DDS’s own administrative records to evaluate whether President Habré’s office and the DDS leadership had command responsibility over the DDS’s operations. Based on the documents recovered by HRW, we concluded that President Habré and the DDS leadership were well informed of the activities of the DDS and that there was a clear communication and command link between President Habré and his secret police (i.e. the DDS). For example, according to the recovered files, Habré received at least 1,265 direct communications that concerned about 898 DDS detainees. Our analysis of the available DDS administrative records also suggests Habré’s “failure to act” in his lack of action to prevent these deaths or reprimand his subordinates who were charged with day-to-day oversight of DDS prisons. These analytical findings have raised serious questions about claims that Habré was unaware of and distant from the DDS’s operations. 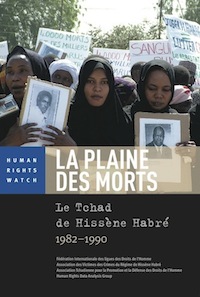 Based on the documents retrieved from the DDS, we were unable to make formal statistical inferences about the total magnitude of killings committed by the DDS, nor were we able to estimate the deaths attributable to Habré between 1982 and 1990. However, we were able to infer conclusions about the existence of routine and ad-hoc communication – and knowledge of DDS policies and practices by the DDS senior leadership and the office of the President.

It’s been a wonderfully rewarding endeavor to work alongside Souleymane, Reed and the team, and contribute data management, analysis and visualizations skills to this important interdisciplinary effort. Today’s publication by HRW is an important step forward in advancing historical memory and accountability in Chad.