The story of one document inside the AHPN 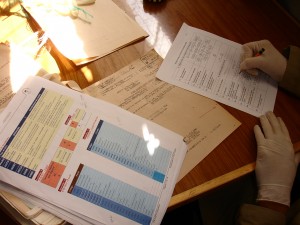 Working with an oficio / AHPN

The beginnings are crucial in every step—as critical as the beginning of sound, life, hope, and justice. Here are some first steps from the AHPN (Archivo Histórico de la Policía Nacional).

This is the story of Oficio Number COC/207-laov, a document that at first appears uninteresting. But this is not just any oficio*. This is one of the many documents that helped bring to trial the people responsible for the disappearance of Edgar Fernando García. A father, husband, son, and student, García was, like many people today, interested in changing his community for the better. 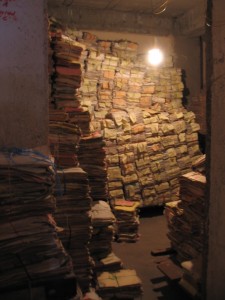 But back to the document. This oficio, when first discovered, was crumpled, with patches of mold and mildew, torn, worn and typewritten. It would be a long road before this oficio could be used as expert evidence.

Since its creation on February 17, 1984, this little document had to pass through many hands and many drawers, endure floods and office relocations, travel in vehicles, and be tied together with other documents in bundles or packages. It saw rats, bats, and rain, and many people passed by without seeing the importance of this document.

But thanks to the curiosity of someone standing in the midst of so many piles of papers, the alert was sounded: these millions of pieces of paper needed help. They must be rescued from certain death. And thus began the process of rescuing and preserving this historic Archive.

However the story of our document does not end here. This was only the first step on a long journey. Now the oficio was no longer cold and wet, and was treated for the serious damage caused by water and mold. But this document needed to be with other, similar documents. Yet now this oficio was stacked at the bottom of a bag with unfamiliar documents (one was a telegram, one came from Xela and other from Amatitlan). 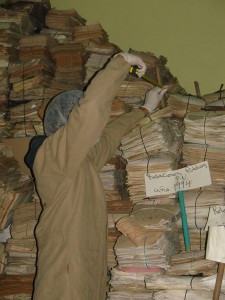 Eventually, the oficio was taken to its new home, the Archive, where it was discovered that its contents contained a key to discovering what happened to Edgar Fernando García. And the oficio went from being a forgotten document to a star of hope.

Now our little oficio is not only safe, but also has a place in history and a home on the Internet. Yes, because thanks to technology, if you look you can find it, still showing the wounds of time and proud to tell its story.

Here is a photo of Oficio COC/207-laov, which shows coordination between the military and police in the strategy of “operación limpieza,” or “cleansing operations.”

And here is the article from September 24 of this year, describing the trial, conviction and sentencing of retired Col. Héctor Bol de la Cruz for García’s disappearance. HRDAG team members Patrick Ball and Daniel Guzmán are mentioned in the article as having a key role in assessing the thousands of internal police records sent between the director’s office and his subordinate commands.

*An oficio is a written communication concerning the affairs of the Police Institution and others with a relationship with the Police.  They refer to or request information from different units.