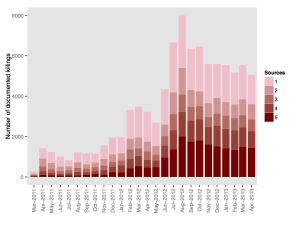 Figure 1 from report on Syria by Price, Klingner, Qtiesh, and Ball (2013, p. 7): Documented Killings by Month and by Number of Sources

Today the United Nations Office of the High Commissioner for Human Rights (OHCHR) released a report prepared by me and my colleagues describing the current state of reported killings in the Syrian Arab Republic from the beginning of the conflict in March 2011 through April 2013.  (UN news release here.) This report is an update of work we published in January 2013.  This updated analysis includes records from eight data sources documenting a total of 92,901 reported killings.

Our analysis begins with 263,055 total records reported by the eight data sources that include sufficient identifying information (name, date, and location*) to conduct record linkage (i.e., the process by which we attempt to ensure that each victim is counted only once). After comparing each record via a combination of human examination and computer automation we identified 92,901 unique records of killings.

Based on our experience with similar data in other conflicts, we believe that this enumeration—92,901—is a lower bound on the true number of killings. Data collected for this analysis include additional records of anonymous or otherwise unidentified victims. These records cannot be included in this analysis because it is impossible to determine if they describe victims also described in other records. But they do provide an indication that at least some victims are unlikely to have been counted in the  92,901 unique records of killings described in this report. In addition to anonymous or unidentified victims, there are certainly also victims whose stories have not yet been told to anyone. Undocumented victims include those whose bodies have not yet been found, victims of violence that was only witnessed by the victim and perpetrator, victims whose loved ones have not yet come forward because they do not feel safe enough to do so, or because they have not found anyone to whom to tell their story, or because they have left Syria and are now refugees.

These victims deserve to be counted as well, and forthcoming analyses will employ statistical models to estimate the total number of killings, both those documented and undocumented.

I should also note that although preliminary estimates indicate that this lower bound is much lower than the estimated total number of killings, at the same time this lower bound may be slightly over counting the number of documented killings.  How are these two seemingly contradictory statements possible?  As described above, there are a variety of reasons why some (currently) unknown number of killings have not been recorded by the eight data sources analyzed for this report.  This is why we consider 92,901 to be a lower bound.  But at the same time, two different categories of records may be erroneously included in this count.  First, despite a combination of human and automated record linkage, some small number of duplicate records may have been missed.  This means that the count may incorrectly include a small number of duplicate records.  Secondly, we have not independently verified any of these records.   Each of the eight documentation groups contributing data to this analysis conducts their own verification process.  But it is possible that the 92,901 count contains some records that are inaccurate and thus should also be excluded from the count.  Examples of such records include victims of non-conflict-related causes, such as illnesses or accidents, individuals who were mistakenly recorded as dead but who are in fact alive, and made up names – names of individuals who do not actually exist.

Thus, we describe 92,901 as a lower bound on the true number of killings, while also potentially a slight over count of the number of documented killings.

* The specific geographic information used for record linkage was governorate; in some records this was explicitly listed, in other records this was inferred from other location information.  Please see our report for these and other data processing details.