How statistics lifts the fog of war in Syria 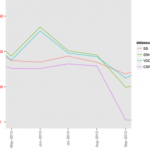 Megan Price, director of research, is quoted from her Strata talk, regarding how to handle multiple data sources in conflicts such as the one in Syria. From the blogpost:
“The true number of casualties in conflicts like the Syrian war seems unknowable, but the mission of the Human Rights Data Analysis Group (HRDAG) is to make sense of such information, clouded as it is by the fog of war. They do this not by nominating one source of information as the “best”, but instead with statistical modeling of the differences between sources.”