On May 15, 2015, HRDAG executive director Patrick Ball addressed a crowd of more than 100 people at Claremont Graduate University during a forum on the potential and limitations of big data. Patrick was one of five headline speakers at the event, which was moderated by Thomas Horan, CGU Professor and Director, Center for Information Systems and Technology. Here’s Patrick’s 12 minutes on “big data.” In addition to Patrick, the panel included: 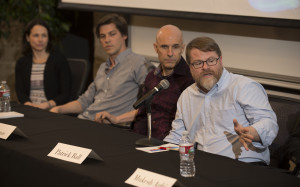