Hissène Habré was president of the former French colony of Chad from 1982 to 1990. Credible allegations of systematic torture and crimes against humanity have been made against Habré’s state security force, the Documentation and Security Directorate (DDS), which pursued political opponents and operated notorious prisons during his regime.

One prison where the DDS is alleged to have tortured prisoners is the “Piscine,” a former swimming pool covered by a concrete roof. Prisoners were held in ten dank cells where witnesses say they were starved and abused.

After being forced from power in 1990, Habré went into exile in Senegal. Habré claims that he was not aware of violations committed by the DDS. Habré’s alleged victims, Human Rights Watch, and a coalition of human rights organizations, began building a case against the former dictator.

The Chadian plaintiffs testified against Habré in Dakar, Senegal in January 2000. Jacqueline Moudeina, president of the Chadian Association for the Promotion and Defense of Human Rights, who is also a lawyer for the victims of the Habré regime, asserted that Habré, “directed and controlled the police force which tortured those who opposed him or those who simply belonged to the wrong ethnic group.”

Message from a prisoner on the wall of a cell at the “Piscine” prison: “Man is made for death and suffering.” (Photo: Zakaria Fadoul)

In February 2000, Habré was indicted in Dakar by Senegalese Judge Demba Kandji on charges of torture and crimes against humanity. Habré was placed under house arrest.

Despite the indictment against Habré, the charges against him were thrown out on a technicality. The victims and their supporters continued to gather evidence against Habré. In 2001, tens of thousands of DDS documents were discovered by chance by Human Rights Watch at an abandoned DDS headquarters in N’Djamena, the Chadian capital.

The documents contain detailed accounts of the interrogations, movements, and deaths of prisoners, as well as information about the internal operations of the DDS. Together, the documents provide potential evidence that Habré was in control of the DDS and knew about the abuses carried out by DDS forces. The Benetech Human Rights Data Analysis Group (HRDAG) began work with Human Rights Watch in 2002 to analyze thousands of these records. 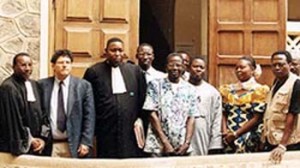 After the case against Habré was thrown out in Senegal, the victims filed complaints against Habré’ in Belgium. A Belgian judicial team carried out a two-week investigation in Chad in March 2002 to gather evidence against Habré.

In November 2003, HRDAG team members Miguel Cruz, Kristen Cibelli, and Jana Dudukovic conducted a preliminary analysis of available documents from the DDS and the Chadian Association of Victims of Political Repression and Crime (AVCRP).

The report, entitled, “Preliminary Statistical Analysis of AVCRP & DDS Documents – A report to Human Rights Watch about Chad under the government of Hissène Habré,” found that detainees within the DDS prisons were at least 16 times more likely to die than the general public. This analysis drew on both the DDS’s own administrative records and the victims’ testimonies. The HRDAG report was given to a Belgian judge to support the second indictment against Habré. 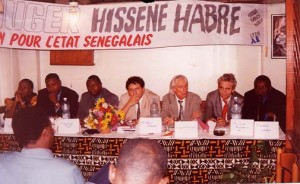 In early July 2005, HRDAG team members Romesh Silva and Scott Weikart contributed statistical analysis to a second Human Rights Watch Report entitled “Chad: The Victims of Hissène Habré Still Awaiting Justice.” In this report, HRDAG presented descriptive statistical analysis on the pattern of detention, and deaths in detention, which had been documented in official records of the DDS. On September 27, 2005, a Belgian judge issued an international arrest warrant charging Hissène Habré with atrocities. The widows of those who were killed by the DDS joined other Chadians in N’Djamena to demand the extradition of Habré to Belgium to stand trial. 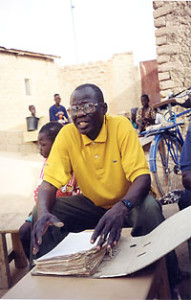 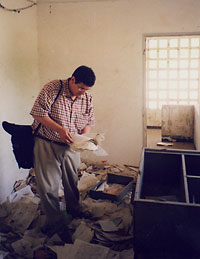 …> …> …> …> This HRDAG analysis of the DDS documents supported the case against Habré and his complicity in abuses by the DDS. HRDAG researchers found that a total of 12,321 different victims were mentioned in the recovered administrative documents from the DDS. These victims were mentioned 39,981 times in 1,941 different documents. The analysis further revealed that Habré received 1,265 direct communications from the DDS about the status of 898 detainees. 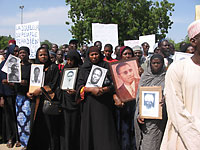 Widows protest in the Chadian capital, N’Djamena on November 13, 2005 demanding that Hissène Habré be extradited from Senegal. (© Madjiasra Nako/IRIN)

The HRDAG database and statistical work also contributed to the presentation of evidence against 41 of the highest-ranking former agents of the DDS. In response to the HRDAG report, and analysis by HRW and its partners, the Prime-Minister of Chad declared in August 2005 that all current officials who served as DDS agents under Habré would be removed from their official duties. The Chadian government also announced its intentions to provide compensation and erect a monument to honor the memory of the victims of political repression under Habré’s dictatorship. 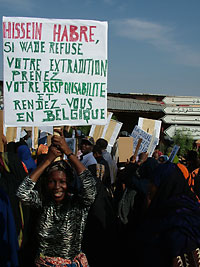 Chadians protesting in N’Djamena on November 13, 2005 demanding the extradition of Hissène Habré to stand trial in Belgium. The sign reads: Hissén Habré, if (Senegalese President Abdoulaye) Wade refuses to extradite you, take responsibility for yourself and go to Belgium. (© Stéphanie Hancock)

Daily lists of prisoners, interrogation reports, situation reports and death certificates, were found strewn on the floor at DDS headquarters.

As a result of the evidence against him, Habré was arrested by Senegalese authorities on November 15, 2005. Under Senegalese law, however, the court did not have the jurisdiction to rule on an extradition against a former head of state. At the request of the African Union, Senegal agreed in July 2006 to prosecute Habré in a Senegalese court.

In 2008, HRDAG completed a new study showing that Habré was well informed of the hundreds of deaths that occurred in prisons operated by the DDS. The HRDAG report, “State Coordinated Violence in Chad under Hissène Habré, A Statistical Analysis of Reported Prison Mortality in Chad’s DDS Prisons and Command Responsibility of Hissène Habré, 1982–1990,” is based on the thousands of documents generated by the DDS. The analysis of DDS document flow included more than 2,700 administrative records which together illustrate a clear communication and command link between Habré and his state security force. 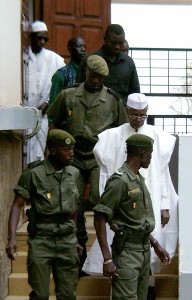 Hissène Habré after being heard by the Court of Appeals in Dakar, Senegal on November 15, 2005. © 2005 Private

The trial of Mahamat Wakaye, Habré’s Deputy Director for National Security, for the alleged attempt on the life of Jacqueline Moudeïna, lawyer for the Chadian victims. L to R: Maître Moudeïna and her lawyers William Bourdon and Jean-Bernard Padaré (Photo: Reed Brody)

The HRDAG analysis shows that Habré received 1,265 direct communications from the DDS about the status of 898 detainees. The findings offer evidence that large-scale human rights violations were carried out inside the DDS prisons, and that both Habré and the Director of the DDS were well informed of DDS operations. 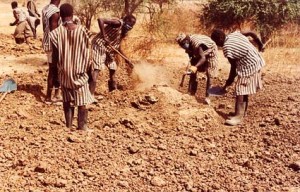 A Chadian Truth Commission exhumes 150 corpses from a mass grave at Ambing, near N’Djamena in 1992. (Photo: Commission d’Enquete)

Submitted in 2008 to a Senegalese prosecutor, the HRDAG study confirms accounts of harsh prisoner conditions and high mortality within DDS prisons. The DDS prisons were overcrowded and rife with disease, leading to a very high death rate of 0.5% – 2% of the entire prison population per day. At the peak of prison deaths, an average of 1 out of every 55 prisoners was dying every day.

The figure below shows the crude mortality rate (CMR) reported in the daily DDS Situation Journals and death certificates fluctuated, averaged by quarter. The daily rate of prisoner deaths within the DDS prisons varied from 30 per 1,000 to 87 per 1,000 prisoners. This rate is much higher than the overall death rate of Chad in the 1970’s and 1990’s, which was less than 25 per 1,000 per year. At its peak in 1986, the median death rate in the prisons was more than 50 times higher than in the general population, and the prisons held mostly adult males who normally have much lower mortality than the population more generally.

The HRDAG report was publicly released in Chad on the 10th anniversary of the first indictment against Habré on February 3, 2000. The analysis contained in the report could be critical in the long delayed prosecution of Habré for crimes against humanity. Present at the release of the report was Reed Brody of Human Rights Watch and Souleymane Guengueng of the Chadian Association of Victims of Political Repression and Crime (AVCRP), who almost died of dengue fever during two years of mistreatment in Chadian prisons.

On behalf of all those who suffered during the Habré regime, the Chadian Association of Victims of Political Repression and Crime and its supporters continues the long effort to bring Hissène Habré to justice.

After years of political negotiations and stalling, in 2012 Senegal reached an agreement with the African Union, and it’s parliament authorized the creation of a special court to try Habré in Dakar, with the proceedings broadcast in Chad. 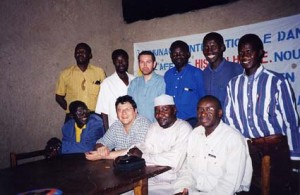