Outreach at Toronto TamilFest for Counting the Dead 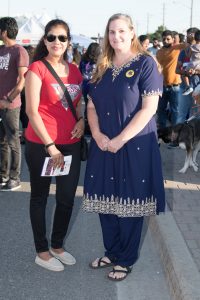 “Young people know there was a war,” said HRDAG data management consultant Michelle Dukich, “but they have not sat down and talked with their elders who lived through it.”

Michelle spent an August weekend in Toronto, Canada, reaching out to the Tamil community from a booth at the city’s annual TamilFest, where she and a colleague from the Canadian Tamil Congress (CTC) invited people to sit down and talk. Specifically, they were encouraging people to take time over the coming weeks to gather recollections about loved ones and friends who were killed or went missing during the Sri Lankan civil war, which ended in 2009.

In January, HRDAG partnered with the International Truth and Justice Project (ITJP) to urge groups inside and outside Sri Lanka to share existing casualty lists, and even more importantly, to go out and record new ones. The aim of this initiative, Counting the Dead, is to use a statistical approach to estimate the probability of a final death toll from the civil war.

Some festival-goers were hesitant, noted Michelle, because of similar projects in the past (by other organizations, not by HRDAG!) that compromised confidentiality and security, or delivered disappointing results. But accompanied by Archana Ravichandradeva, who speaks Tamil, the two were able to make a great deal of progress. They encouraged young people to ask their elders about the war and then record the deaths and disappearances on Google forms that can be accessed here: Tamil version and English version.

“It was heartbreaking,” said Michelle. “One woman was 15 when her entire village of 300+ people were killed. An older couple whose adult son was killed. A mother about my age whose husband was disappeared in 2008. It was tough to listen to them and not feel their pain.”

Some people returned to the booth with names they got from their older family members. One man told Michelle and Archana that he had two books of names and would get them to CTC to be scanned and translated, so the names could be entered into a spreadsheet. A group of young men in their 20s said they were going to talk to their own families and encourage their friends to talk to their families.

“Archana is going to have social media influencers in the community spread the word and have a Facebook challenge: I have entered the stories from my family, have you?” said Michelle.

“This was a joyous celebration of Tamil culture and community,” she said. “I think our work at the festival was a success, and I hope to see data dropping into the spreadsheets.”

The Toronto Star covered TamilFest and the Counting the Dead project, as well.