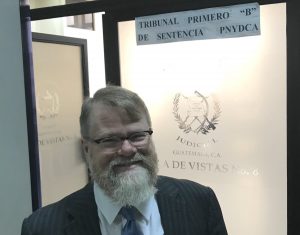 On March 2, 2018, Patrick Ball testified in the re-trial of General José Efraín Ríos Montt and the re-trial of chief of military intelligence José Mauricio Rodríguez Sánchez for the crimes of genocide and crimes against humanity against the Maya Ixil population.

The court proceedings took place in High Risk Court “B,” presided over by three judges.

Ríos Montt died less than a month after the re-trial, in April 2018, and the court closed the case against him. In a split decision, Rodríguez Sánchez was acquitted in September, 2018. (The court explicitly found that the Army committed genocide, but that Rodríguez Sánchez was not in the chain of command and thus not guilty.)

Ríos Montt came to power in a military coup d’état on March 23, 1982 and was deposed 17 months later, on August 7, 1983. Human rights organizations estimate that 10,000 people were killed in the first three months of his government alone. During the first eight months of his government, more than 400 indigenous communities were destroyed. Rodríguez Sánchez served as Director of Military Intelligence (G-2) under Rios Montt.

On May 10, 2013, the Guatemalan Constitutional Court found Ríos Montt guilty of genocide and crimes against humanity and sentenced to 80 years in prison. It was the first time ever that a former head of state was found guilty of genocide in his own country. Rodríguéz Sánchez was also tried at that time but was acquitted. Ten days later, a Constitutional Court decision on May 20, 2013, resulted in the vacating of the conviction of Ríos Montt and the acquittal of Rodríguez Sánchez. The courts determined that the case would be retried. Ríos Montt was freed from prison and returned to house arrest; Rodríguez Sánchez, who had been freed, was returned to the military hospital. Re-trials were postponed several times before finally happening in 2018.

The Rodríguez Sánchez Genocide Retrial: Highlights of the Proceedings

This afternoon at the genocide trial against former military intelligence chief Rodriguez Sanchez. Today statistician Patrick Ball will present his expert testimony. His testimony in 2013 was critical to the court’s determination of genocide. #Guatemala #sihubogenocidio pic.twitter.com/XVWk5hp461

.@vm_wylbur testified twice today, first in the morning proceedings against #RiosMontt, which are closed to the public, and then in the afternoon proceedings against RodriguezSanchez, both accused of #genocide and crimes against humanity. #Guatemala #JuicioPorGenocidio https://t.co/JbFrFb3iSc