An Award for Anita Gohdes 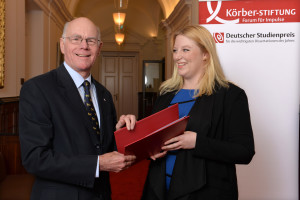 On November 26, HRDAG colleague Anita Gohdes was awarded the German Dissertation Prize for the Social Sciences. The patron of the prize is the President of the German Parliament, Norbert Lammert, who presented Anita with the award.

Anita’s dissertation, “Repression 2.0: The Internet in the War Arsenal of Modern Dictators,” investigates the role played by social media networks in modern dictatorships, such as President Assad’s regime in Syria. On one hand, Anita argues, social media can help opposition groups to organize more effectively, but on the other hand, the same networks allow regimes to monitor and manipulate the population. President Assad uses the Internet actively for spying and targeted killing of dissidents, says Anita.

“HRDAG’s Syria project really laid the groundwork for most of the empirical analyses in my dissertation!” said Anita. “The work with HRDAG taught me how to work with such vast amounts of data on atrocities in a responsible and scientifically rigorous way.”

We’re incredibly proud of Anita, who has been a terrific partner to us for our work on our Syria enumeration and estimation projects. Naturally, we look forward to working with her more in the future and to seeing what she does next!

The Körber Foundation gives out a yearly prize for the most important dissertation in Germany in the Social Sciences, the Humanities, and the Natural Sciences.

Here’s more information about her award (in German) from the Körber-Stiftung website.