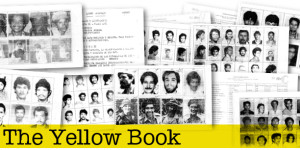 With the release today of a civil war-era catalog of “enemies,” Salvadorans are calling for a new look at the 12-year civil war during which hundreds of citizens were victims of human rights violations such as torture, forced disappearance, and illegal imprisonment.

The recently leaked document, known as The Yellow Book, is a list created and maintained by the Salvadoran armed forces during the nation’s civil war (1979–1992) and identifies nearly 2,000 Salvadoran citizens who were deemed “delinquent terrorists” by El Salvador’s military during the 1980s. The list includes labor leaders, human rights advocates, politicians, and other civilians, along with corresponding photographs and notes on their alleged connections to suspect organizations including unions, political parties, and rebel groups of the Farabundo Marti National Liberation Front (FMLN). HRDAG analysis suggests that many of those civilians named in the catalog were targeted for extrajudicial punishment by the military. By analyzing the names in the Yellow Book against reports of human rights violations registered by Salvadoran human rights organizations and the U.N. Truth Commission during the period of 1980 to 1992, HRDAG has determined that 43 percent of the names in the Yellow Book correspond with the names of victims in the databases.

The release of the catalog is a collaboration undertaken by the Unfinished Sentences project, the University of Washington Center for Human Rights, the National Security Archive, and HRDAG.

El Salvador’s civil war ended in 1992 with the signing of the Chapultepec Peace Accords, and since that time the Salvadoran military has been mostly silent about its role in human rights abuses during the civil war. With the release of The Yellow Book, which was leaked, the public may now be inspired to call for the release of military intelligence and military archives that have been kept private. The release takes place on September 28 in honor of International Right to Know Day.

Patrick Ball, executive director of HRDAG, said, “Our work with the University of Washington Center for Human Rights and the National Security Archive supports the public’s call for the Salvadoran Armed Forces to open their archives. The truth about the military’s intelligence operations–and the violence that resulted–has long been hidden. It’s time for accountability.”

“For more than twenty years, El Salvador’s military establishment has stonewalled victims and their families about its role in human rights abuses committed during the civil war,” said Kate Doyle, Senior Analyst of U.S. policy in Latin America at the National Security Archive. “The publication of the Yellow Book is a direct challenge to the military’s continued silence and its refusal to release its historical archives relating to that era.”

As is explained in HRDAG’s memo, “Matching the Libro Amarillo to Historical Human Rights Datasets in El Salvador,” the datasets are composed of 1,857 records taken from four sources: the Human Rights Commission of El Salvador (CDHES), the Tutela Legal del Arzobispado organized by El Rescate (Rescate), direct testimonies to the truth commission, and indirect sources. The memo accompanies the publication of the Yellow Book and describes the technical work on the analysis. Both are available at unfinishedsentences.org and nsarchive.org, along with related analysis and declassified U.S. documents. [pdf English] [pdf español]

To join the conversation about The Yellow Book tweet to @uwchr @TruthElSalvador @NSArchive and @hrdag and use hashtags #YellowBook and #RighttoKnow.