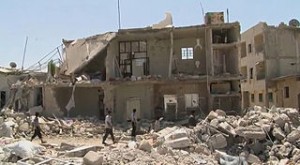 Today the United Nations Office of the High Commissioner for Human Rights (OHCHR) released an HRDAG-prepared report that describes and tallies documented killings in the Syrian Arab Republic from the beginning of the conflict in March 2011 through April 2014. (The report is here.) This is our third report for the UN on the Syrian conflict, and it is an update of work we published in January 2013 and June 2013.

The report, Updated Statistical Analysis of Documentation of Killings in the Syrian Arab Republic, concludes that approximately 191,000 identifiable victims have been reported in the period covered (March 2011 – April 2014).

In our last report, which covered March 2011 through April 2013, we identified nearly 93,000 unique records of killings. Today’s report shows a number that is approximately 98,000 greater than the tally from 14 months ago—this does not mean that there have been 98,000 additional killings in the last 12 months. The increase of 98,000 killings represents both new killings in the last 12 months and killings from the 2011-2013 period that continue to come to light.

Anita Gohdes, one of the report’s authors, said, “As this report shows, so-called ‘real-time’ data can be problematic because human rights groups are likely to uncover more and more facts as time goes on.”

Megan Price, lead author and HRDAG’s director of research, said, “The groups on the ground are doing very good due diligence reviewing and updating all their historical records, incorporating new information as it becomes available and confirmed, and thus the observed count changes as we learn more.”

It’s important to note that this report is an enumeration of reported killings; there are surely killings that have yet to be documented. The only way to arrive at an estimate of actual killings instead of reported killings is to use statistical science to estimate killings, including the ones we don’t know about, rather than enumerating only the ones that have been identified.

Patrick Ball, also an author and executive director of HRDAG, said, “It’s critical to remember that these enumerations represent a lower bound. We’ve taken painstaking steps to make sure that each victim is counted only once and that each victim is positively identified”

As with our two enumerations from 2013, this enumeration was commissioned by the OHCHR, and HRDAG worked with several documentation groups that collected data on the ground in Syria to the best of their ability and in an admirable fashion. These documentation groups are the Syrian Center for Statistics and Research; the Syrian Network for Human Rights; the Syrian Observatory for Human Rights*; and the Violations Documentation Centre. This version integrated 319,000 records; our last report from 2013 integrated 263,000 total records.

HRDAG is working on an estimated total number of killings, but is proceeding with caution, as the underlying datasets continue to be updated and revised.

For questions regarding who is being killed, where, and when, please refer to our “14 Questions” post about counting casualties in Syria.

*The Syrian Observatory for Human Rights shared data with the UN in 2013, and those data are included in the report. They declined to share an updated list in early 2014.