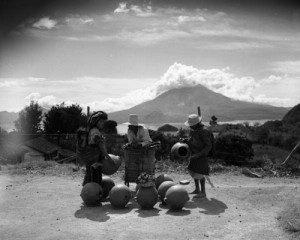 When people talk about war criminals in Guatemala, which war are they talking about?
They’re talking about the Guatemalan civil war, which began in 1960 and ended in 1996. That’s thirty-six years of civil war. Even though it ended almost two decades ago, Guatemala is still recovering from it. At its simplest, this civil war story was right-wing government forces fighting leftist rebels. But it went deeper than that, of course. The majority of the rebel forces was composed of indigenous peoples, primarily the Maya, and the Guatemalan military and police forces aggressively targeted these populations, committing human rights violations in the process.

Who are these war criminals?
A war criminal is anyone who commits a war crime, either with his own hands, or by ordering someone else to do it. That includes soldiers and low-ranking officers as well as military commanders. The military commanders are of special interest because through their orders, they are responsible for much bigger crimes. We call this “command responsibility.” In some cases, it might be possible that the commanders turned a blind eye to what their rank-and-file were doing. But investigators think that some of these commanders planned specific acts of violence against civilians and made sure they were carried out.

How, exactly, are these war criminals being brought to justice?
For many years, the Public Ministry in Guatemala has been pursuing justice through the Attorney General’s office of Guatemala. The two most recent trials of note have been those of General José Efraín Ríos Montt (April 2013) and Colonel Héctor Bol de la Cruz (September 2013). In both cases the defendants were found guilty. General Ríos Montt, who was the de facto president of Guatemala in 1982 and 1983, was found guilty of genocide against indigenous Maya Ixil, and Colonel Bol de la Cruz, the former director of the National Police, was convicted for the abduction and presumed murder of student and labor leader Edgar Fernando García, who disappeared in 1984. The General was sentenced to 80 years in prison, and the Colonel was sentenced to 40.

What’s the role of data analysis in these convictions? And what’s HRDAG’s role, specifically?
In the General Ríos Montt case, HRDAG executive director Patrick Ball provided expert testimony called by the prosecution in the Supreme Court of Guatemala. With data analysis, he was able to show that during Gen. Ríos Montt’s tenure as the de facto president of Guatemala, military violence was directed at the indigenous ethnic group known as the Maya Ixil (the Maya who live in the Ixil region comprising the municipios of Nebaj, Chajul, and Cotzal.) The analysis showed that the homicide rate for non-indigenous peoples in the Ixil region was 0.7 percent, while the homicide rate for the Maya was 5.5 percent: the probability of being killed by the Army was 8 times greater for the Maya Ixil than for their non-indigenous neighbors.

In the Colonel Bol de la Cruz case, Patrick and colleague Daniel Guzmán assessed the flow of thousands of internal police records sent between the Colonel’s office and his subordinates to show that the chain of command was functioning at the time of García’s capture. The functioning chain of command is consistent with the argument that Colonel Bol de la Cruz had effective command of the agents who disappeared Edgar Fernando García in 1984.

What was the reception in court to the use of data analysis as evidence?
When the Ríos Montt trial ended, the three presiding judges wrote into their 718-page opinion a bit of a hat tip to HRDAG analysis. Among the several nice things written by Judges Barrios, Bustamante, and Xitumul about the analysis, the thing that stuck out most for us was this line: “[The analysis] confirms, in numerical form, what the victims said.” This is exactly how we at HRDAG understand statistical analysis—as an abstract, aggregated form of individual witnesses’ testimony. Also, HRDAG analyses in the initial García case contributed to the judges requesting that the prosecutors pursue the case up the chain of command.

What is the significance of these verdicts?
When the Supreme Court found General Ríos Montt guilty of genocide and crimes against humanity, it was the first time that a former head of state was ever found guilty of genocide in his own country. Now, this is not the first time that a head of state has been found guilty of war crimes. In 2006 Saddam Hussein was found guilty by a provisional tribunal, and in 2009 Peru’s Alberto Fujimori was found guilty by a special tribunal.  What’s significant about the Ríos Montt case is that the justice process occurred in the legitimate courts of Guatemala, his own country.

Wasn’t one of the convictions overturned?
Yes. On 20 May 2013, Guatemala’s Constitutional Court threw out the genocide conviction and prison sentence of General Ríos Montt, citing procedural errors, and said it needed to re-start. HRDAG does not get involved in legal decisions. We provide the statistical analysis for the justice-seeking organizations that need it to make their cases. What happens after that is out of our hands.

What will happen with General Ríos Montt and Colonel Bol de la Cruz?
The General was 86 when he was convicted. He’s 87 now. He’s been returned to house arrest, where he’s been since 2012, and he is now awaiting a new trial. It’s unclear whether there will be retrial, and how that would play out. Colonel Bol de la Cruz was convicted at age 73, denied the charges, and has appealed the decision. He is currently being held at the Matamoros prison in Guatemala City.

Why do articles always mention the “National Police” in these cases? Was that Guatemala’s military?
The Guatemalan National Police was the central branch of Guatemala’s security forces during the war, and its officers committed many of the civil war’s atrocities on behalf of the government. In the words of the National Security Archive, it was “an entity so inextricably linked to violent repression, abduction, disappearances, torture and assassination that the country’s 1996 peace accord mandated it be completely disbanded and a new police institution created in its stead.” In 2005, some human rights officers in Guatemala discovered a secret archive containing about 80 million pages of documents from the National Police. Statistical analysis of these documents (by HRDAG) helped to establish command responsibility on the Colonel Bol de la Cruz case, and further analysis will help with more convictions. HRDAG is still conducting analysis of these documents.

What is HRDAG’s history with human rights in Guatemala?
Patrick Ball, HRDAG’s executive director, started work in Guatemala in the early 1990s, when he was working at the American Association for the Advancement of Science. One of his first projects was to design a database and help encrypt information for the International Center for Human Rights Research in Guatemala (CIIDH). This was all done with tools that we’d now consider rudimentary. For example, FoxPro for DOS and 3.5” floppy disks. From 1993 to 1999, Patrick worked with the CIIDH to collect and organize evidence of more than 43,000 human rights violations, the accounts collected from press reports, NGOs, and victims. The CIIDH project turned out to provide a key data source to support the work of the UN-organized Commission for Historical Clarification (CEH). Established in 1996 as part of the UN-brokered peace accords between the government and guerrilla umbrella organization URNG (Guatemalan National Revolutionary Unity), the mission of CEH was to clarify human rights violations and acts of violence in Guatemala. In 1997, Patrick helped the CEH build a database to classify more than 11,000 interviews they conducted. HRDAG’s work with Guatemala has continued steadily and now director of research Megan Price and colleague Carolina López are involved in projects as well. You can read more about their work here.

Is there something going on with the Attorney General of Guatemala?
In February of this year, Claudia Paz y Paz had her term as attorney general cut short. We admire Ms. Paz y Paz’s dedication to justice, and we are confident that wherever she lands next will benefit from her incredible skill and integrity.

What’s next up for HRDAG and Guatemala?
We’re steadily working away at analyzing the documents from the National Police Archive, and we continue to study the data and to prepare analysis so that we can be ready when and if the Public Ministry calls on us to provide evidence or testimony in future trials. There are plenty of cases that can and should be investigated, and if substantiated, brought to justice in Guatemala. We hope we can be part of future trials that could benefit from statistical reasoning about mass violence.    —@GrilloCM