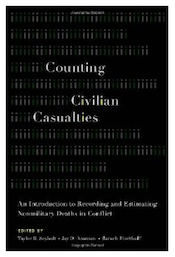 Next week, on June 11, Oxford University Press officially puts Counting Civilian Casualties: An Introduction to Recording and Estimating Nonmilitary Deaths in Conflict on the market. This textbook, edited by Taylor B. Seybolt, Jay D. Aronson, and Baruch Fischhoff, responds to the increasing concern for civilians in conflict and aims to promote scientific dialogue by highlighting the strengths and weaknesses of the most commonly used casualty recording and estimation techniques.

HRDAG is very well represented here, as our colleagues have co-authored four chapters, and Nicholas Jewell, who sits on our Science Committee, has co-authored a fifth.

The chapters including HRDAG authors are:

“A Matter of Convenience: Challenges of Non-Random Data in Analyzing Human Rights Violations in Peru and Sierra Leone,” by Todd Landman and Anita Gohdes.

We extend our thanks to Taylor Seybolt, Jay Aronson, and Baruch Fischhoff for their fine work as editors on this major undertaking—wrangling together a textbook of this import is no easy task.

Lastly, we’d like to suggest that, while the hardcover version of the book will run you about $100, there are paperback options offered by Amazon and Powell’s for a much reduced price. A third option is an ebook; for this we recommend checking ebook sellers (e.g., Google eBooks or Amazon Kindle) after the publication date of June 11.

One last thing. While we’re grateful to Oxford for publishing this book, we’re sorry to report that none of the chapters have been licensed as Creative Commons. So, unfortunately, we cannot share any of the content with you on this site. But we hope you’ll be able to read it nevertheless!