HRDAG and the Trial of José Efraín Ríos Montt 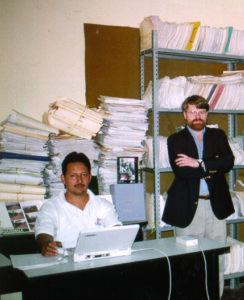 Patrick Ball (right) with a CIIDH staffer in 1998 with about half the paper coding forms, documents, photocopies and press clippings coded and classified in the CIIDH database.

At some point in the next week, HRDAG’s executive director, Patrick Ball, will be providing expert testimony in the trial of General José Efraín Ríos Montt, the de-facto president of Guatemala in 1982-1983. Gen. Ríos is being tried on charges of genocide and crimes against humanity. (His military intelligence director, Gen. Mauricio Rodríguez Sánchez is also on trial.) Patrick will testify on approximately April 15-18, 2013, and he may begin as early as this Friday, April 12.

The trial opened on March 20, 2013, in the Supreme Court building in Guatemala City. According to an Open Society Justice Initiative blogpost covering the event, the courtroom was “packed to overflowing.” The alleged crimes occurred more than 30 years ago, and the case was brought to the Public Ministry by the Justice and Reconciliation Association (AJR), with help from human rights lawyers at the Center for Human Rights Legal Action (CALDH). To follow the trial, check out this website, created by the Open Society Foundations.