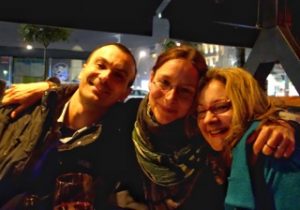 I first met Patrick Ball in the summer of 2008. At the time, I was a young woman who had just completed a masters degree and was interested in quantitative analysis and statistics. I was intrigued by the topics of armed conflict and state repression and engaged in volunteer work that supported higher education projects in (post-)conflict zones. And I was grappling with the responsibility that I felt I carried as a contemporary German for how we apply the lessons of the Holocaust today. I spent that summer as part of a San Francisco-based group of Humanity in Action (HIA) to learn about human rights and minority issues in New York and the Bay Area. One day, our group of HIA fellows visited the Human Rights Program at Benetech to learn about the work of Patrick and his team at the Human Rights Data Analysis Group (HRDAG).

Learning about HRDAG’s work left a huge impression on the younger version of myself that day. I left Palo Alto with the feeling that I had found a new opportunity for creating purpose and meaning in my life and returned within weeks to apply for an internship. Two months later in January 2009, I was sitting on a plane bound to Bogotá, Colombia, to enter an intense HRDAG boot camp on statistics and computer programming led by Patrick, and to meet my new HRDAG colleagues Kristen Cibelli, Tamy Guberek and Daniel Guzman. I spent those first three weeks learning to work with a Mac, trying out different editors to eventually settle on Emacs. I introduced myself to HRDAG’s structured approach to principled data processing and learned that there was such thing as the command line. I immersed myself in R (and abandoned Stata), and one day, I joined my new colleagues as they watched Obama’s first presidential inauguration on Capit0l Hill on TV, from a sofa in a Colombian living room.

Once back in San Francisco, I continued my deep dive into HRDAG’s principled data processing, gradually becoming involved with the statistical analysis of the database of the Liberian Truth and Reconciliation Commission (TRC). I remember that those first weeks and months at HRDAG were the hardest. I spent countless hours trying to learn the intricacies of Makefiles, subversion, R scripting, and yaml coding, adopting HRDAG’s practices of what we call “CONSTANTS” or “magicnumbers,” constantly debugging, and often peer-programming with Patrick or Amelia Hoover Green, when all else failed. I also gained a new, nerdy appreciation for kittens in those early days. 1 and 0, Patrick’s cats, whom I looked after whenever he was out of town, became my cherished companions as I ventured deeper and deeper into HRDAG’s complex world of data and code, more code, and more data.

It is one particular project, which I undertook with Patrick between 2012 and 2014, that shaped my understanding of the production of human rights data profoundly: the evaluation of the Kosovo Memory Book, a database of human losses due to armed conflict in Kosovo between 1998 and 2000, that was jointly compiled by the Humanitarian Law Center and the Humanitarian Law Center Kosovo (HLC) to commemorate that conflict’s victims. It was, however, not the technical procedure of record linkage that I applied to assess the completeness and quality of the KMB database against ten other data sources that also reported victims of the Kosovo conflict. As part of the evaluation process, I twice visited with HLC in Belgrade, Serbia, to learn exactly how their data was collected. During each of these visits I sat in on long meetings that detailed the work of the HLC analysts and researchers, visited the HLC archive, spoke with various HLC staff to learn more in-depth about their documentation practices, and spent multiple hours with HLC Researcher and Analyst Predrag (“Pedja”) Miletic querying the database for particular victims that the matching software had identified.

My take-aways from visiting with the HLC tie back in with the lessons that HRDAG has been determined to share with the human rights community and beyond long before I joined the team: documenting human rights abuses is a challenging task, undertaken by meticulous human rights defenders who operate in often hostile environments. Despite those efforts, the data are typically incomplete. But our HRDAG evaluation revealed that the HLC database is an exception—the Kosovo Memory Book is complete. The team of HLC researchers has been able to rigorously verify every available source to document all or very nearly all killings and disappearances that occurred during the Kosovo conflict. This accomplishment is truly exceptional: in most modern conflicts that occur outside of Europe, over longer time periods, and in less accessible environments, we will not be able to obtain a complete count of victims despite our best efforts. While the Kosovo Memory Book project has provided us with an inspiring monument to human dignity, it also teaches us that conflict scholars, analysts, practitioners, and policymakers need to treat raw human rights data with extra care and methodological rigor before drawing critical conclusions in their own work.

I have made it my personal objective to amplify HRDAG’s message of being extra careful and scientifically rigorous with human rights data in my work as an empirically trained political scientist. At the moment, the norm in social science scholarship on political violence is to analyze patterns of only reported violence, while not accounting for the non-observed proportion of violations. I contribute HRDAG’s signature approaches of record linkage and multiple systems estimation to a currently rapidly evolving, methods-oriented field in the discipline that seeks to explore the inferential challenges of and methodological solutions to observational violence data. I further invite my students to be more critical with the massive amounts of data and information that they consume via daily news or policy debates. My undergraduate class on the global politics of body counts enables students to meet and learn with and from practitioners in the human rights field to better understand the complexities that come with any set of available information. It is the quest for truth and accountability of human rights violations that I share with HRDAG that has kept me hooked and committed to HRDAG’s mission, then and now.

Image: Predrag Miletić (left), Jule Krüger and Marijana Toma (right) of the Humanitarian Law Center in Belgrade, March 2014, after completing a long day of meetings to facilitate an evaluation of the Kosovo Memory Book.